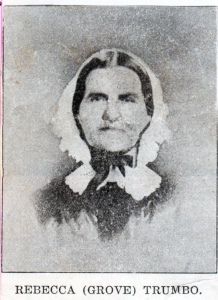 (From Friday’s Daily)
On the return of the sixty-eighth anniversary of Mrs. Elizabeth Trumbo Strawn yesterday, December 5th, there were present, besides her four sisters, Mr. O. W. Trumbo and wife, Mrs. C. B. Hess and Jesse Green, whose united ages including an absent brother of Mrs. Strawn, amounts to seven hundred and twenty years.

Mathias Trumbo, father of Mrs. Strawn, came to this country in the year 1830, and all shared the hardships of pioneer life, and of this entire family of eight children only two have died, one son in 1840 and one daughter, Isabella, in 1854.

Those surviving are Mrs. Lovina Matlock, aged 82 years; Eliza Gibson, 75; Elias Trumbo, 75; Barbara Jackson, 72; Elizabeth Trumbo Strawn, 68; Anna Robison, 63. All the sisters are widowed, except the latter Mrs. Robison; with very few exceptions it is rare to see so many aged persons in one family.