This appeared in the Voice of the People column in the Chicago Tribune, May 17, 1965.

In January, 1921, Prosper Hisler, a resident of Dayton, applied for a passport, saying that he wanted to go back to France to see his brother and sisters in Wildersbach. Prosper was born there in 1864 and at the age of 25 he and a number of young men from his neighborhood came to the United States. They landed in New York in February 1889 and many of them came on to the area around Somonauk and Serena, Illinois, where there was a French settlement.

Prosper became a naturalized citizen in 1896 and lived in Dayton, where he found work in the brick yard. He was industrious and in 1902 was able to purchase a house and lot in the village. By 1910 he was a laborer on the C B & Q railroad.

Did he keep in touch with his family back in France? It was perhaps in order to see how they fared after the war that he went back to France in 1921. In order to afford the trip, he sold his house in Dayton and planned to sail from New York on January 15. Although he said on his passport application that he would return within the year, there is no indication that he ever came back to the United States.

This may be explained by an entry in the margin of his birth record in Wildersbach. He was born July 22, 1864, and alongside the birth record a marginal notation tells of his marriage in Wildersbach, November 5, 1921. At the age of 57, he was married to the widow Damoiseaux, nee Marie Elise Hisler. 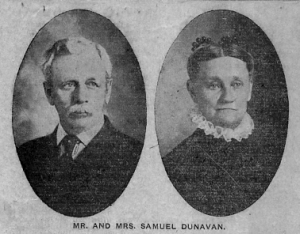 Fifty years ago today Miss A. Miranda Munson, daughter of Mr. and Mrs. William Munson, of Freedom township, became the bride of Samuel Dunavan, son of Mr. and Mrs. J. Albert Dunavan, living seven miles northeast of Ottawa, and today, after spending half a century together, they celebrated the event by entertaining one hundred of their friends and relatives at a dinner, served at the Clifton hotel.

The children of the couple were present and guests gathered from many cities and states. The gathering was a most pleasant one, and the sounds of laughter echoed through the rooms and corridors of the old Clifton as it never did before.

Mr. Dunavan spoke entertainingly of “The Pioneer,” and Mrs. Ida Cove responded to “The Golden Wedding.”

Mr. and Mrs. Dunavan were married at the home of Mr. and Mrs. William Munson, parents of the bride, after a courtship of almost four years. J. Albert Dunavan, father of the groom of fifty years, resided on a farm seven miles northwest of Ottawa. He later purchased a tract of land on Indian creek, in Freedom township, and sent Samuel Dunavan, then 18 years old, to the new farm to herd cattle.

The country was not so thickly settled in those days as now and Samuel, the boy, became lonesome with nobody to talk to but the cows and his dog, and one day he wandered away to the Munson home, where he met Miranda Munson, then 17 years old.

Many a trip was made to the Munson home by Samuel Dunavan during the long months that followed, and he and Miss Miranda became pretty warm friends.

Then came a separation. The parents of the young woman decided to send her to college, and she was hustled away to Rockford to attend the Rockford Female Seminary, and Samuel Dunavan was sent to Bryant & Stratton College, where he graduated in 1859.

The young people kept up a regular chain of correspondence, and a short itme after his graduation and return form college Mr. Dunavan and Miss Munson were married. It was to be a quiet affair, with only a few of the near relatives present, and Jesse Green, uncle of the groom, was on hand to perform the ceremony.

After the wedding Mr. and Mrs. Munson took up their residence on the farm they now occupy near Baker Station, and where they have made their home ever since. Mr. and Mrs. Dunavan were born in La Salle county and have always made this county their home.

Jesse Green, who married Mr. and Mrs. Dunavan, died in Ryburn hospital last summer. Had he lived it was planned to have him again perform the ceremony, but since his death the old folks have decided that the ceremony performed half a century ago will hold good until the end comes.

In 1870 Albert F. Dunavan purchased the Dayton horse-collar factory, a thriving business. The collars were sold throughout Illinois and adjoining states, and in New York, Pennsylvania, Virginia, and California. In 1886 they even received an order from Sidney, Australia, enthusiastically described in the Free Trader as the most distant sales ever made from La Salle county. The Dunavans did a good business for many years, but in 1892 the business failed and was sold to pay the debts. Albert Dunavan then moved to Harvey, Illinois, where he worked in insurance and real estate, but he also applied for a patent on an apparatus for shaping horse collars, based on his many years of experience.