On December 24, 1847, David Green, son of John and Barbara (Grove) Green, married his cousin, Mary Stadden, daughter of William and Judah (Daniels) Stadden. They lived in Dayton, in this house.

They had ten children, five girls and five boys.

John William Green was born about March 25, 1854 and died May 8 of that same year. He is buried in the Dayton Cemetery.

In May of 1833, widow Barbara Lionberger Grove, mother of Barbara Grove Green, came from Licking County, Ohio, to La Salle County, Illinois, with her son Elias. They joined her four daughters and two sons, who were already living in Rutland township, across the river from Dayton. She undoubtedly lived with one or more of her children, but which one is not clear until 1838. On December 12th of that year a deed was recorded from Joseph Grove to Barbara Grove, selling 40 acres of land to her for $1. The deed includes the following proviso:

So if Joseph did not support her “in a good and decent manner” she would own 40 acres of land she could use or sell for her support.

Why was this deed made?

Just six months before, on June 28, 1838, Joseph married Elma Jackson. By December of that year, it would have been apparent that she was pregnant. Perhaps the deed was made to reassure Barbara that the forthcoming child would not affect her status in the household. 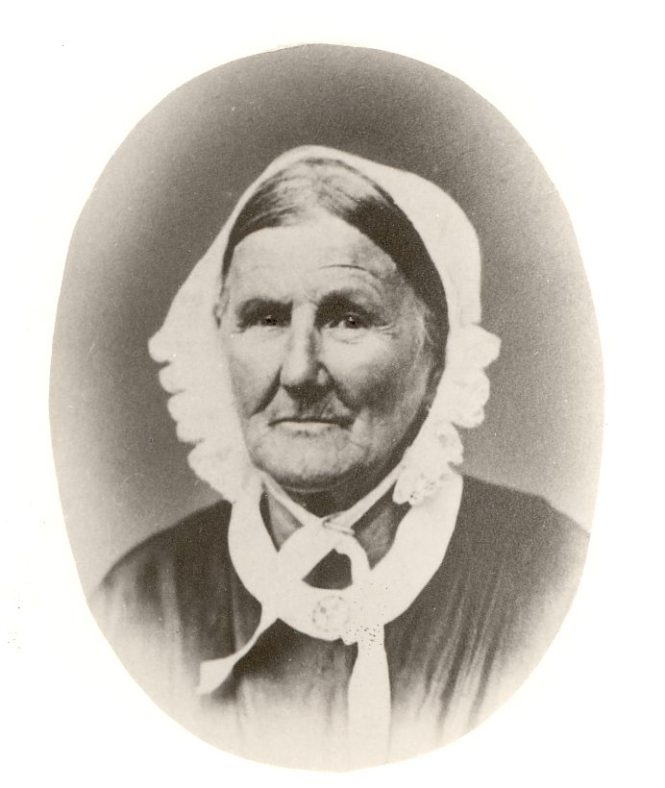 Much of the information about Barbara Grove Green comes from notes written down by her granddaughter, Maud Green, which I now have.

Barbara Grove was born near Woodstock, in Shenandoah County, Virginia, on the 15th of November, 1792, the daughter of John Grove and Barbara Lionberger. Both of her grandfathers, Christian Grove and John Lionberger, served in the Revolutionary War from Virginia.  The Lionbergers were Swiss immigrants who arrived in America in 1735. John Grove, her father, of Swiss and German ancestry, was “a large and powerful man who could pick up a barrel of flour under each arm and toss them on a wagon”.  Maud notes that Barbara had a vest which had belonged to her father, and that it was much too large for any other member of the family.

In 1805, when Barbara was thirteen, John Grove sold the land he had inherited from his father in Virginia and moved to Fairfield County, Ohio, where German and Swiss pioneers from Pennsylvania had already started a settlement.  Barbara never attended an English-speaking school until arriving in Ohio. Among the settlers already established in that part of Ohio was Benjamin Green, with his large family.

Barbara Grove and John Green were married on March 28, 1813. Sixteen years later, after the birth of nine children, and the death of two of them, they moved from Ohio to Illinois. Barbara was then 37 and her youngest child was 14 months old. The party consisted of 10 men, ten children, and four women. The other three women were Barbara’s 19 year old sister, Emma DeBolt, who had a 3 month old baby; her 24 year old sister-in-law Annie, wife of her brother David, who had a 2 year old child; and her husband’s 24-year old niece, Elizabeth Brumbach, who was 6 months pregnant with her second child. As the oldest woman in the group, Barbara was surely called upon to provide support to the entire party.

The trip from Ohio to Illinois was full of adventure. One of the county histories tells the story of how the  group was spending the night in a heavy rain (this is in November) and Barbara lay down in the wagon, trying to sleep and was frozen fast  and unable to get up in the morning.

Once they arrived in Illinois, there was also plenty of work to do to feed the family. As Jesse Green told the story:

The second and third winters we were here we had about two feet of snow, which lay on the ground most of the winter, and drifted badly and crusted over so that we could ride over fences without difficulty, and prairie chickens were so plentiful and tame that on a frosty morning, they would sit on trees so near our cabin that Father stood in the door and shot them, until some of the men said he must stop before he shot away all of our ammunition, and leave none to shoot deer and turkeys.  Our first winter here Brother David and myself trapped rising three hundred chickens, besides a large quantity of quail.  After eating all we could, Mother merely saved their breasts salted and smoked them.

“Merely” is not the word I would use for salting and smoking three hundred prairie chicken breasts, but that was “women’s work” and Jesse didn’t seem to think too much of it.

The first year must have been a lonely one for the women of that small party, but the next year more settlers  arrived from Ohio, many of them relatives. Then in 1833 Barbara’s mother and brother Elias came to Rutland,as well, so she was surrounded by family.

The Black Hawk War affected much of La Salle County. The Indian Creek Massacre may be the most well-known of the local occurances, but here is how Barbara Green related her part of the action to her granddaughter, many years later.

On the 16th of May 1832, about ten o’clock in the morning, myself and the girls were washing at the spring near where the feeder bridge now is when Eliza came down on horseback and told us that the Indians were coming & that we would have to go to Ottawa right away.  Then we went to a place a couple of miles below Ottawa (to Penbrook) and stayed there all night the next day come up to Ottawa and next day home again.  This was Sunday and the next day the men made a stockade around the house out of plank.  After it was finished they tried it to see if a bullet would go through it, and it did, so they hung up feather beds all around.  There were about sixty people here at the time, we were so crowded that they had to sleep on tables, under the beds and all over the house.

The same night George Walker came and told us that we must go to Ottawa again, so we left right away and went down to the river to get in the pirougue, but when we got there we found that Daniels’ had taken the boat and gone before we got there, so we had to walk.  As I had forgot some of Rachel’s clothes and, coming back to the house, I found Jesse and David yet in bed.  They had been waked before we started so I supposed they were with us.  We followed the river bank all the way down and I had to carry Becky all the way because she would cry when anyone else took her.

Aunt Becky Trumbo was sick so that she could not walk and she rode on the horse behind old Mr. Letts.  Eliza Trumbo was left standing on the river bank and we went off and forgot her.  Wm Dunavan came back and got her.  When we got to Ottawa there was no fort there, only a log cabin on the south side of the river, but they soon built a fort on top of the hill.  We went to the fort but there was so much confusion there that we had the log house moved up on the hill and lived in it.  We women didn’t know what the trouble was til we reached Ottawa and then they told us about the “Indian Creek Massacre” where there were sixteen people killed.  Two boys who ran away and two girls who were taken prisoners, were the only ones that escaped.

The next day (?) a company of soldiers from the southern part of the state passed through Ottawa on the way up the river and two men Hazleton and Schemerhorn who lived at Mission Settlement intended to go with them to their farms but failed to get ready in time and so were an hour or two behind the soldiers.

The duties of a housewife on the frontier must have been endless. Maud writes that she remembers her grandmother making candles for them to carry upstairs. She also wrote “Grandma spent her time knitting socks and long stockings for all of us, out of factory yarn, and we had woolen underwear, skirts and dresses made of factory flannel”. The factory referred to is the Green’s woolen mill, which made both yarn and cloth.

John and Barbara Green had 70 grandchildren and they all came frequently to visit Barbara at her home in Dayton until she died in 1886, at the age of 93. Barbara also had over 200 great-nephews and great-nieces; the grandchildren of her 3 brothers and 3 sisters who lived across the river in Rutland. She had come a long way, from the little group of 24 pioneers to the senior member of a large family. 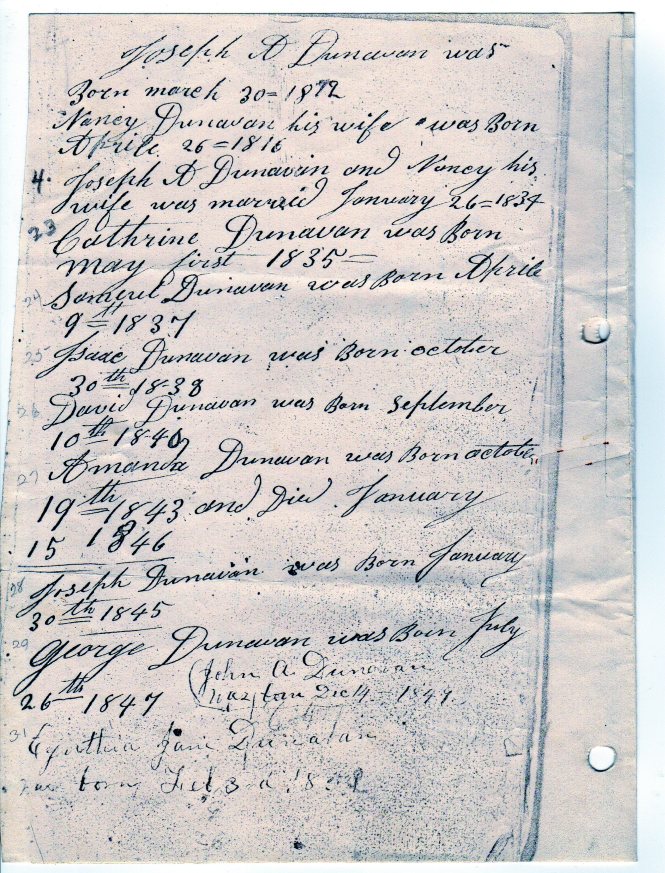 Cathrine Dunavan was Born
May first 1835

From a history of Licking County, Ohio:

In the spring of 1800 two brothers, John and Isaac Stadden, came up the Licking Valley and entered upon some bottom land, partially cleared, a mile below Newark, now on the Jones farm, and built a hut or cabin. In September, 1800, Mr. Isaac Stadden removed his family from Pennsylvania into the cabin erected for them in the spring. He drove the first wagon that passed up the Licking Valley from Zanesville to Newark. The trip occupied two days, although his brother John and another man were along to assist in clearing a path for the wagon.

During the summer, John Stadden, having made the acquaintance of Betsey Green, daughter of Benjamin, became enamored of the fair maid of Shawnee Run, and after an honest courtship of reasonable length for pioneer times, she, nothing loth, having fallen into his notions on the subject, they resolved upon matrimony, and matrimony they committed, and it was the first offense of the kind in civilized life within the limits of Licking County.

A child born to them in the latter half of the year 1801, was the second birth in what is now Licking County, and its decease before the close of said year was the first death.

John Stadden moved to “Hog Run” in 1802, and in 1808 was elected Sheriff (the first one) of Licking County, in which office he served two years. He was also for some years Collector of Taxes, and held other positions of honor and trust in military and civil life.  His son, Richard was Sheriff of this County from 1834 to 1838, and was, in the last-named year, elected a member of the Senate of Ohio.

Colonel John Stadden was a man of integrity, uprightness, and a fair degree of intelligence. Late in life he removed with his wife to Illinois, where they died. They were honored and highly esteemed while living, and died leaving a reputation untarnished. He and his wife were original members of the first Methodist society formed in this County, which was in 1804, by Rev. Asa Shinn.1

By 1840, they were living in Dayton, Illinois, where Betsey Green Stadden’s brother, John, had established a thriving settlement. John Stadden died there on January 26, 1855, at the age of 77 years, 4 months, and 2 days (as recorded on his tombstone) and was buried in the Dayton Cemetery.