Dayton on September 14, 1929, was the scene of a glorious centennial party, marking the 100th anniversary of the arrival of the Green party in Illinois. Two bands, a children’s chorus, and a dance orchestra provided music; a gigantic tug-of-war and other tests of skill and strength amused the merry-makers; and former residents came from near and far to join the festivities.

A marker was dedicated on the spot where the mill-stones were found which were used in Green’s mill, the first water-powered mill in northern Illinois. The marker, a brass plate with the story of the discovery, was placed on a boulder set in cement, along the east bank of the river. Although the boulder may still be there, the brass plate disappeared many years ago.

There were many mementos, relics and curios on display:
.     straw plug hat and woman’s straw hat of the vintage of about 1800
.    old candle molds
.    flintlock guns which belonged to Peter W. Ainsley and Tim Thompson
.     blankets and coverlets made in the old woolen mill
.     hoop skirts, dresses, black silk and satin capes
.     an 85 year old spinet, having twenty-nine keys, and thirty inches in height
.     a tardy bell and a call bell from an old school
.     mourning shawls and hats, which were loaned out at the time of funerals

The revelry went on well into the evening and a good time was had by all.

At age 32, he enrolled as a private in Company C, 1st Regiment, Illinois Light Artillery Volunteers on August 22, 1862. He participated in a number of noted campaigns: the battles of Chicakamauga, Missionary Ridge, and Kenesaw Mountain, and Sherman’s march to the sea. He was discharged at Springfield, Illinois, June 12, 1865. He suffered from rheumatism and heart trouble as a result of a fever he contracted at Nashville in the winter of 1862-3. He spent some weeks in the hospital and suffered from rheumatism from then on.

This severely limited his ability to do farm work and made him eligible for a pension. On his return from the war, he spent 8 years in Kansas, returning to Dayton in 1874. In the summer of 1880 he was working in the paper mill in Dayton when he injured himself jumping up out of a pit without waiting for the ladder to be brought. In 1889 he applied for a pension from the federal government, claiming rheumatism and heart trouble due to the sickness he suffered in January 1863. In 1892, after the investigation into his claims, he was granted a pension of $8/month, retroactive to August 16, 1889. In 1903, he applied for an increase, claiming total disability; his pension was raised to $12/month.

He died in Dayton, September 30, 1914. Both he and  Elizabeth are buried in the Dayton cemetery, along with children Nellie Virginia, Ellis, Emmor, and Nora (wife of Lowell Hoxie). 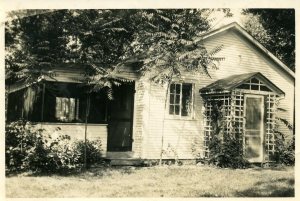 In the late 1800s and early 1900s Dayton was quite an attraction. In the summer weather it was the stamping ground of many a picnic party. During the fishing season, sportsmen and picnickers flocked there by the hundreds.  A few brought tents and camped out for a few days, although unseasonal cold weather could put a damper on events. A number of summer cottages were built along the east side of the river, below the dam. One of these cottages, pictured above, was owned by Walter Brown, and the Green and Brown families spent many vacations there in the summer. A camping trip to Dayton was popular with residents of other towns, also, as shown in the newspaper reports below:

1881
The river is falling slowly, and is now being crossed at both fords. Fishermen and sportsmen are here in great numbers. The Earlville people seem to have struck a “boom” and are turning out en masse for a good time fishing and camping out.

1882
Our busy little neighbor, Dayton, besides becoming famous for her horse collars, woolen goods, tile and paper, is getting to be quite a popular summer resort. The stream of visitors during the few weeks since the fishing season opened must be enormous, for on every bright day at least the banks of the river are lined with people. As a sample of the size of parties: – Some 25 couples from Streator went up in a special car on Tuesday! Already the campers have begun to put in their appearance, and it is altogether likely that from this time until fall there will be no great diminution in the number of visitors. We should think the citizens would turn this flood of tourists to their advantage; and they certainly could make themselves vastly popular with the people of the Fox River Valley by lending their aid in the suppression of illegal seining in their waters.

1885
A mammoth pleasure excursion and basket picnic has been arranged to run from Streator to Dayton on Tuesday, Aug. 18th. For three years similar excursions have left there, and this promises to be the most enjoyable of all. Dayton’s beautiful scenery, fine shade, and unequaled reputation as a pleasure resort is unsurpassed, and Streator people, having no such beautiful or romantic camping out places near their city, have to come this way for such beneficial pleasures.

1901
The camp just north of the ice house above the dam, is certainly an ideal spot. There are about a dozen glass blowers from Streator at the camp, and sometimes as many as fifty visitors can be seen enjoying camp life at one time. Good boating, turtle soup and fresh fish always on hand, and no one who ever visited there ever went away without leaving sweet memories behind. On Saturday, August 17th, will be “Ladies’ Day” at the camp, when the wives and lady friends of the members will be present and a most enjoyable day is expected by all. Good music and dancing will be one of the features of the day.

Twenty-nine boys ranging in age from five to ten years of the “Fresh Air Fund” arrived over the Q. R. R. at 11:17 A. M. on Tuesday. A number of ladies and gentlemen from Ottawa met them at the train and escorted them to their camping ground, just west of Basil Green’s residence. The camp presents a very pretty appearance, everything about it being very neat and tidy. Eight tents comprise the sleeping apartments, while one dining, two commissary and one kitchen tent make up for the rest. Felix Mader of Ottawa presides over the culinary department, while Charles Caton acts as his assistant. Through the courtesy of Mr. Basil Green a dam has been built just south of the camp, where the boys may bathe and enjoy a fresh water bath, unlike that of the Chicago river. Judging from the first day or two, the visitors next week will be very numerous, and will no doubt wake up this old burg, which has so long been sleeping.

1902
There are more than one hundred people in camp along the Fox river between Dayton and Wedron.

1908
Dayton, just north of Ottawa, on the Fox river, is becoming a great summer and fishing resort. A party from Streator has been camping there for several weeks. The Burlington sells from fifteen to twenty tickets each day to parties who go there to spend the day fishing and visiting the campers already there. 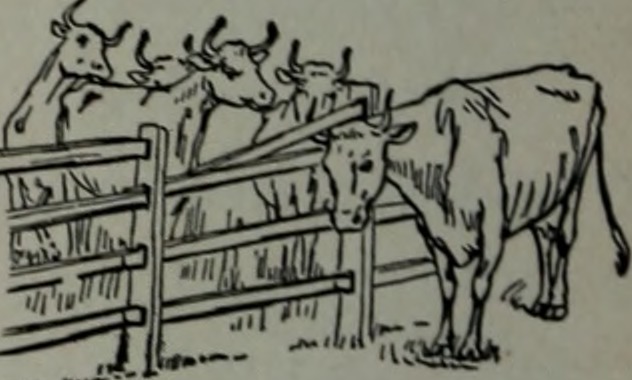 An example of quick thinking:

A few days ago one of J. Baker’s (Dayton township) most valuable cows was taken violently sick after eating white clover. Seeing that death was inevitable unless immediate relief was given, Mr. B. made an incision, with a knife, 7 ½ inches below the backbone and 7 inches from the hip. Result, the cow is now well.1

One of the great dangers to cattle pastured in a field with white clover was that of pasture bloat. Bloat, the buildup of gas in the stomach, is part of the normal process of digestion and is usually gotten rid of by belching. Eating the white clover produces foam which blocks the release of the gas. Death can come on in as little as fifteen minutes, so Mr. Baker’s quick act was necessary to save his cow’s life.