In 2014 and 2015 a major restoration project worked on cleaning and resetting about 70 stones in the Dayton cemetery, with the result shown above. It seems that 140 years ago the cemetery also received a face-lift, as described below —

Dayton, Ills., June 20. –
Passing through the cemetery north of town a few days ago, we were struck by the clean and white appearance of the tombstones. Many stones that had been lying on the ground were reset and were in their proper positions, many that had become dirty were now as white and clean as when first erected. Upon due inquiry we found that the work had been done by Mr. L. A. Smith of Marseilles, a gentleman who makes tomb-stone cleaning and resetting a business, who has many years experience, and judging by his work, gives good satisfaction. We are glad to see our citizens have made a move in this direction, and with the community would move a vote of thanks to Mr. Smith for his excellent work. 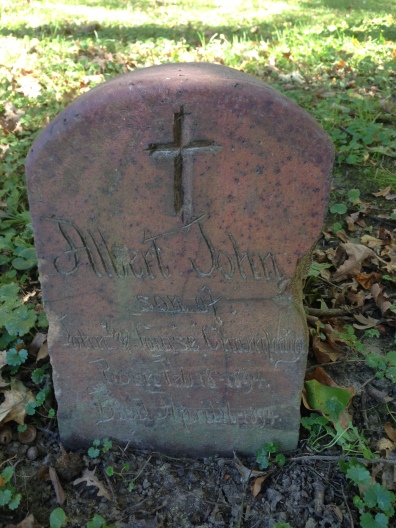 Handmade memorial stone for a child

In the early years of the Dayton Cemetery, many of the burials must have been informal – that is, not handled by an undertaker. The primary source of this information comes from the death certificate, where available. The earliest burial with a death certificate was in 1878, so clearly, for those burials between 1835 and 1878, we have no way of knowing who performed the burial. However, even for those burials after 1878, some were done informally.

William Hoag’s 1879 death certificate leaves the undertaker field blank. Frank Hudson was buried by A Trumbo in 1881. Burials in 1888 and 1902 either specify “unknown” for the undertaker or leave the field blank. Three others specify a single name, with no indication whether they were undertakers or private citizens. As recently as 1922, at least one infant burial was performed without the services of an undertaker.

In an analysis of the 113 death records found for burials in the cemetery, the majority were handles by the Zimmerman/Gladfelter Funeral Home (54 instances). This furniture and undertaking establishment was founded in 1862 by Simon Zimmerman and has been in continuous operation ever since. In 1886, Elmer E. Gladfelter married Zimmerman’s daughter Anna, and in 1889 assumed charge of the business. The business retained the Zimmerman name until his death in 1894, and has operated under the Gladfelter name to the present day.

There are 44 known burials that had no visible stone in 2015, when the most recent restoration was done. There are some pieces of broken stones, too fragmentary to be reassembled, in the woods at the edge of the cemetery, though a few had been recorded before they were damaged.

Sixty years ago this weekend members of the Dayton Cemetery Association and their families got together to work in the cemetery on Memorial Day weekend. The board members elected at that annual meeting were:

The morning work of clearing away around the gravestones and general cleanup was followed by a potluck dinner at the home of Grace and Charles Clifford in Dayton.

The upper picture is of members of the Holmes, Pottenger, and Baker families. Leave a comment if you can identify any of them. 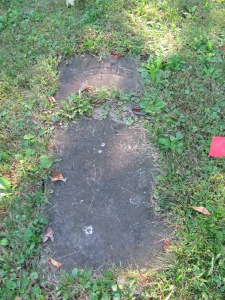 In 2014 and 2015 we repaired and restored a number of the grave markers in the Dayton cemetery. The cemetery was 180 years old and over the years had suffered from vandalism and the ravages of time and weather. Some stones had fallen over and were embedded in the ground, as was the Gerret J. Harms stone seen above. Others had been knocked over or had fallen as the ground shifted beneath them. John Heider, a professional gravestone restorer, drafted a number of family members as his willing, if not terribly able, helpers. Before we were done, some of us were very able.

Some other before and after pictures may be seen here. 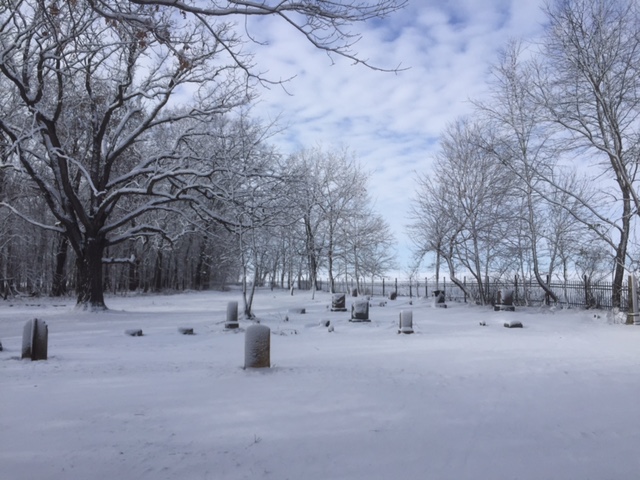 Causes of death
Of the 98 persons for whom cause of death is known, the seven most common causes were (in order of frequency): heart disease, cancer, meningitis/pneumonia, accident, apoplexy/cerebral hemorrhage, old age, and tuberculosis.
These seven accounted for 62 deaths.

Family clusters
The largest cluster is that of the Green/Grove/Dunavan families, which, with in-laws, includes 147 people. There are ten members of the Warner/Tanner/Luce family, nine members of the Timmons family, 11 members of the Breese/Hoxie family, seven Hoags, and seven in the Bennett/Wilson cluster. 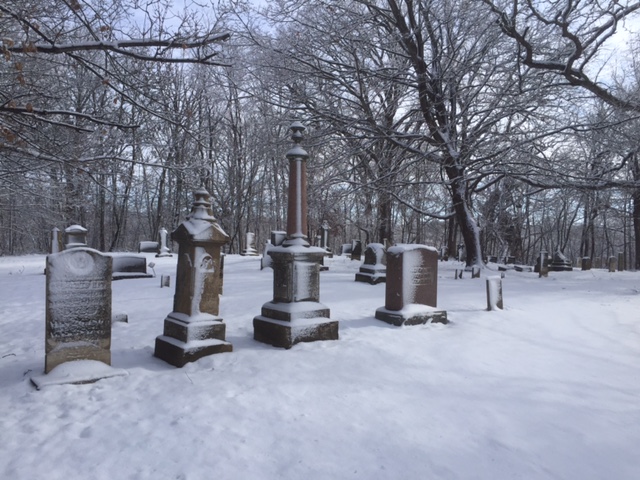 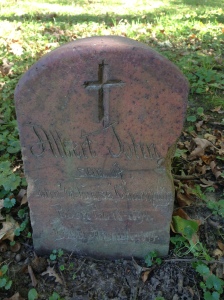 This tiny gravestone, only 12 inches high, stands out in the Dayton Cemetery not only for its size but for its material. It is made of brick and appears to be handmade. John Champaign, the father of little Albert John, was a day laborer in the brick yards in Dayton. Whether he made the gravestone himself or had a friend at work do it for him, it almost certainly was made in Dayton.

John Champaign was born in January, 1858, in Michigan, of French-Canadian stock. In 1870 he was living with his parents and siblings in South Bend, Indiana. On September 21, 1880 he married Louise Haverley in South Bend. Sometime before 1883, John and family came to Dayton, where they were living in 1900. By 1910, they were back in South Bend, where they lived out their lives, John dying in 1938 and Louise in 1947.

One of their daughters, Grace, married James C. McGrogan of Dayton on April 30, 1900, and remained in Dayton when her parents moved back to South Bend.

In September 2014, the Dayton Cemetery Association worked with a professional restoration expert to repair a number of monuments which had been damaged by vandals. Our first effort was the Martin Welke stone, seen above. After the middle section was replaced on the base, attention turned to replacing the top.

And here is the reassembled stone: 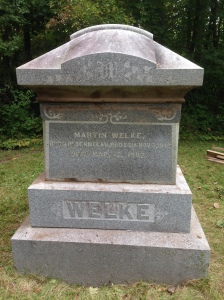 We repaired seventeen stones that week and plan to continue the work in 2015.