Noah Brunk Being duly Sworn, Deposes and says, he is engaged to be married to Miss Elizabeth Amanda Parr that the said Elizabeth is under the age of Eighteen Years, and that he is over the age of Twenty-one Years. that he [has] the consent of the parents of said Amanda for her marriage with him at this time.
Noah Brunk
Subscribed and sworn before me
this 19th day of September 1857
S W Raymond   Clerk

In a somewhat unusual procedure, the consent for the marriage of this under-age bride was not given by her parents, but by the prospective bridegroom, who assured the authorities that he did indeed have the consent of her parents. The marriage was solemnized on the 24th of September, as shown by the marriage license.

Amanda would have been about 16 at this time. In the 1850 census, she appears with her parents and siblings as Elizabeth A. Parr, age 9.

Noah and Amanda had three children, Thomas L., Ida Bell, and Cora B. Ida Bell died as a child and is buried in the Dayton cemetery. 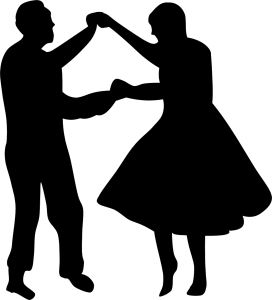 Dayton, March 4, 1884. – The young folks sent out about twenty-five invitations last week for a social party at the residence of H. B. Williams, Esq., in East Ottawa of Friday evening, Feb. 29. Messrs. John Hall, Chas. Green and Wm. Dunavan were the invitation committee, and Messrs. C. B. Hess and S. W. Dunavan were floor managers. About twenty couples were present and all had a very enjoyable time. Two large parlors had been prepared for dancing, the floors nicely waxed, and everything was in good trim. The music by Prof. Cliff G. Sweet and wife of Aurora, consisting of violin and harp, was excellent and was greatly enjoyed by all present. For good first class music, new changes and delicious waltzes, they cannot be excelled and we can heartily recommend them to parties desiring such music. At a late hour the guests retired thanking Mr. and Mrs. W. for their kind hospitality and for the pleasant time they had had. The following guests were present: Prof. and Mrs. C. W. Tufts; Mr. and Mrs. T. E. MacKinlay; Mr. and Mrs. C. B. Hess; Misses Stout, Misses Angevine, Misses Dunavan, Misses Watts, Craig, Barnes, Marriner, Misses Childs, Misses Loy and others. Messrs. Angevine, Trumbo, Hall, Mitchell, Butters, Dunaway, Flick, Clauson, Messrs. Green, Messrs. Dunavan and others.1

Ice up to the floor of the bridge

The Fox River has put on some spectacular floods in its time, but perhaps none were more newsworthy than the great ice gorge of 1952. A photographer from Chicago television station WNBQ-TV was flown over the gorge to film it and thousands of spectators flocked to Dayton to see what was happening. A slight bow appeared in the bridge due to the intense pressure against it by the slush ice. The bridge was closed to traffic when the gorge first formed, but later even pedestrians were not allowed on the bridge. When the ice subsided, the bridge was tested to be sure it was still usable.

A number of the houses on either side of the river at Dayton were submerged in the ice. The power house of the North Counties Hydro-Electric Company was out of commission due to several feet of water on the floor of the plant. The Red Cross opened an emergency shelter in the Dayton Women’s Club clubhouse to assist those displaced by the flood.

The Army Corps of Engineers was asked to assess the possibility of using dynamite to blow up the gorge, but the opinion of an expert was that the ice was too slushy and it might take a whole trainload of dynamite. The better choice was to let the rising temperature let the gorge break up gradually, not with a sudden break which would flood many of the low-lying homes along the river in Ottawa.

In a day or two, the river had dropped and the ice melted, but the cleanup for the flooded houses and power plant took weeks.

The following list of students in the upper grades of the Dayton School comes from the La Salle County Genealogy Guild’s notebook on county schools.

At the 2008 meeting of the Dayton Cemetery Association the program was about Eliza Ann Shaw, who was married to two Civil War soldiers and is buried in an unmarked grave in the cemetery. This is the transcript of the program.

Eliza Ann Shaw was born in London, England, in 1841. Her father, James Shaw, was a greengrocer; her mother, Catherine Henessey, was born in Ireland. The family lived on Carnaby Street, less than a mile from Buckingham Palace. It is possible, even likely, that ten-year-old Eliza and her brothers and sister were among the crowds that watched Queen Victoria on her way to open the Great Exhibition at the Crystal Palace in 1851.

James Shaw brought his family to the United States in 1854. I don’t know why he came to Dayton, but there were a number of English families in Dayton then. Perhaps there was some connection that brought the Shaws to La Salle County. In December of 1856, shortly before her 16th birthday, Eliza married a young man from Dayton named Michael Klingston. Michael came to the US from Bavaria and became a US citizen in 1863. By 1864, they had three small children.

In September of that year, Michael was drafted in the 1st Illinois Light Artillery, at a time when Sherman was fighting the battles around Atlanta. Sherman had been fighting since May and needed replacements for his army. Michael Klingston probably arrived at Atlanta just after the city surrendered on Sept. 2. He then took part in the march to the sea and arrived in Savannah, GA in December. Savannah surrendered on the 22 and Michael was probably taken ill around this time, since he did not take any further part in Sherman’s march north through the Carolinas. Instead he was transferred to David’s Island in New York suffering from chronic diarrhea. From there he was sent to Quincy, IL, where he died on April 15, 1865. His cause of death is given as consumption.

Michael appears to have been buried at Quincy; he is not buried in the Dayton Cemetery. Eliza and the children continued to live in Dayton. In December 1865 Eliza remarried. Her second husband, John Jaka, a farm hand from the St. Louis area, had also served in the Civil War.

John Jaka volunteered at the beginning of the war in July of 1861 and joined the 9th Illinois Infantry, which became known as the “Bloody Ninth”. The 9th earned its reputation by being involved in the fighting at Forts Henry and Donelson in Feb. 1862, then being sent to Pittsburg Landing, which was the site of the battle of Shiloh. At Shiloh, the 9th was in some of the worst of the fighting, and of the 520 enlisted men that went into the battle, 324 of them were either killed or wounded. John must have had a charmed life if he escaped all this with no injuries. Between spring of 1862 and summer of 1864, the 9th was mounted on mules and so scouted and raided through Alabama and Mississippi. It was during this time that John was injured the first time. Quoting from his application for invalid pension, he states “He was on picket-duty mounted on his mule when said mule was shot from under him by a shot from the enemy. He thought he could get the mule on his feet again and while attempting to do so, the mule in his struggles, struck John on the great toe of his left foot dislocating the said toe and otherwise greatly injuring the foot. On account of that he went to the Regimental Hospital near Atlanta, GA where he remained untreated for 24 hours, then returned to his regiment.” The 9th took part in Sherman’s battle for Atlanta, and that was where John was injured for the second time. Quoting again, “At the battle of Atlanta, on or about the 22 day of July, 1864, while in the act of discharging his Spencer rifle at the enemy, his said gun was struck by a gun shot from the enemy which struck the stock of his rifle and threw a splinter therefrom which struck him in or near the right eye seriously injuring the same.” John probably didn’t see any more action in the war, since he was discharged in August of 1864, probably because his 3 years were up. The 9th was one of about 16 regiments across the country that were considered “German” and John Jaka was German by birth.

Following his discharge in August of 1864, John came to Dayton. Again, it’s not known what brought him to Dayton. He may have known someone during the war who was from this area. He worked as a farm hand for Sylvester Brown, near Wedron. In 1865, he married the young widow, Eliza Klingston. All was well for a time, but a year later Eliza’s mother, Catherine Shaw, was named guardian of the Klingston children, due to their mother’s being adjudged insane. This guardianship was probably to ensure that the pension the children were entitled to for their father’s war service would not be controlled by their mother’s second husband. The insanity appears to have been temporary, however, and Eliza soon returned home, to take up her life with John Jaka. By 1883, Eliza and John had four sons.

When Eliza was about 46, she again became insane and was in a hospital for a short time, but then appears to have again recovered and returned home. This recovery was not permanent, either, and in 1893, at the age of 52, she was again confined to an insane asylum, first in Kankakee and later in the La Salle County asylum. In 1904, after John’s death. she entered Bartonville Asylum, near Peoria where she spent the rest of her life. Her son Otto was named her guardian. When she died, in July 1907, Otto brought her body back and she was buried in the Dayton cemetery. There is no stone marking her grave.