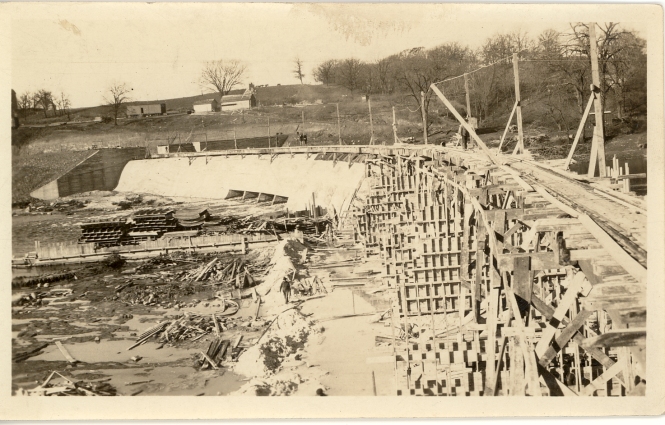 Eleven men were hurt, three fatally it is thought, and fifty more escaped injury when a forty-foot trestle, used in the construction of the Dayton Dam on the Fox River four miles from Ottawa collapsed at one o’clock today under the weight of four cars of cement and an electric locomotive.

All of the men were removed as soon as they could be extricated from the tangled framework of the wrecked trestle, to Ottawa hospitals.

The three not expected to live are:
Al Muhebauer, 19, Little Falls, Minnesota, fractured skull.
Elmer Starks, 37, Marseilles, internal injuries.
Andrew Poka, 20, back, head and legs hurt.
Other workmen were uninjured when they escaped the falling timbers by miraculous good fortune.

It was the first time the trestle had been used, and the cement was being poured into the dam wall from it when the supporting timbers gave way.

The construction camp was thrown into consternation, but work of removing the injured was begun immediately. Ottawa ambulances were rushed to the scene, carrying the workmen back to the county seat.1 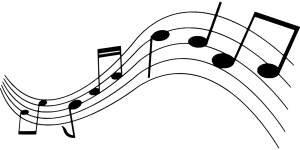 from the Ottawa Republican-Times, September 16, 1929

A song composed especially for the centennial by Edith Dunavan Hamilton, a great granddaughter of John Green was sung by Miss Isobel Brown at the afternoon program. The song follows:

“Sound of the axe-man’s stroke, creaking of ox-teams yoke, bravely the young wives smile ‘though danger lurks the while. Planting the cornfields, plowing for bounteous yields, braving the winter’s cold, we honor you, dear pioneers of old.

By the river gently flowing – Dayton, mellowed by the year’s swift going – Dayton. Through days of storm and strife, through years of peaceful life for those gone these many years, we pause to shed a tear, today we gather to honor your 100 years.”

In 1870, Margaret Pitzer, widow of Anthony Pitzer, died at the home of Oliver Trumbo. This is truly a death bed will, as she died on the following day.

I, Margaret Pitzer of the town of Dayton in the County of La Salle and State of Illinois, make this my last Will. My property consists of Notes of hand, which I wish to give and bequeath as follows, that is to say,

1st It is my will and desire that all legal and Equitable demands against my Estate Shall first be paid, which will consist in part, My Doctor Bill, Funeral Expenses, and my board bill and Expenses incurred while at the house of Oliver W. Trumbo of Dayton La Salle County Illinois. I particularly desire that a liberal compensation be paid to the said Oliver W. Trumbo as my disease has been one of no ordinary Character.

2nd I give and bequesth unto my sister Mrs. Elizabeth Davis, of Crawford County Illinois Two Hundred (200.00) Dollars.

3rd I give and bequeath unto my brother John Wagy of Kirkusville Licking County Ohio Three Hundred (300.00) Dollars.

4th I give and bequeath  unto my sister Martha Harris of Quincy Illinois Two Hundred (200.00) Dollars.

5th I give and bequeath unto my nephew William Wagy of Stones Prairie Illinois his Note and Interest, which is in my hands, and amounts to about THree Hundred (300.00) Dollars.

6th I give and bequeath unto Miss Eliza Gross my Neices Daughter, now about seven years old, and lives with Henry Wagy of Adams County Illinois, Eighty (80.00) Dollars in Gold, with interest, when she shall arrive at Eighteen years of age.

8th I give and bequeath unto my nephew Joshua Wagy of Springfield Illinois, Three Hundred (300.00) Dollars.

9th Should there be anything remaining after paying Expenses of settling up my Estate, I desire that one half of the Balance shall be given towards the Erection of a Methodist Church now in contemplation and to be located near the residence of William L. Dunavan in the Town of Rutland in the county of La Salle and State of Illinois, And the remaining one half to be given towards the Erection of a House of Public Worship, to be located in the Village of Dayton La Salle County Illinois.

I appoint Jesse Green of the Town of Dayton La Salle County Illinois as the Executor of this my Will.

In witness whereof I have signed and sealed and published and declared this instrument as my will, at Dayton on this sixth day of April A. D. 1870.

Eliza Gross, seven years old in 1870, was to receive her inheritance in 1881, when she turned 18. In 1879 she married John W. Lanier, but unfortunately she died on the 20th of January 1880. Her husband made a claim on the estate and was awarded his wife’s share anyway. 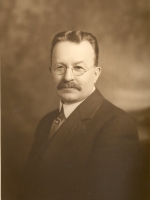 Dayton, Feb. 24. – Friday evening, Feb. 13, the Musical Union gave a concert and entertainment, which was well attended and quite a pleasant occasion. The class are making good progress in music and it is to be hoped the Union will continue its existence for a long period. The choruses “Great is the Lord,” “Lift your glad voices,” “Zion’s children, ” “O, Lord of Heaven,” “Crown them as Martyrs” and “We all are happy rovers” were given in a very fine manner. Marks of power were carefully observed, thereby giving considerable expression and life to the choruses. The male quartette and glee club, consisting of Messrs. Green, Rhoads, Howard and Grove, sang a few selections in an admirable manner. Their quartette “I love the path of the tree” and chorus “Barnyard Serenade” are especially worthy of mention.

A large force of men are employed on the railroad south of the dam, filling in a large ravine.

The store has changed hands, Mr. T. H. Green (Harry) having taken possession of it the 1st of February. He is doing a cash business.

Mr. Jesse Green and Mr. C. B. Hess went to Chicago on business this week.

Major Whittle and Mr. McGrannahan and wife, the evangelists, will hold a meeting in this place Saturday evening, Feb. 28.

Monday evening a number of our citizens attended the celebration of the tin wedding of Mr. and Mrs. Thos. McKinley of Rutland. We hear it was a very enjoyable affair.