Nancy Green was born 200 years ago today, April 26, 1816, in Licking County, Ohio, the second daughter of John and Barbara (Grove) Green. She was 13 years old when her family moved to what later became La Salle county, Illinois. In 1831, her older sister, Eliza, married William L. Dunavan. Three years later, on January 26, 1834, Nancy married William’s brother, Joseph Albert, and three years after that, Nancy’s sister Katherine married Albert’s brother George. Joseph and Nancy lived on a farm in Rutland township, across the Fox river from Dayton. They had twelve children:

Nancy’s husband went to California in the gold rush. There was no word of him for some time and the rumor spread that they had started home through Mexico (as indeed they had) and had been killed there (as they had not). The night he got home, Nancy had a headache as a result of a toothache cure she had applied. She had run a hot darning or knitting needle into the cavity of her tooth to stop the pain. When he got home she entirely forgot the tooth and headache and they sat up about all night talking and visiting.

John Green had given Nancy and Albert a quarter section of land when they married, and they had turned it into a prosperous farm, where they raised their large family. However, in 1883 disaster struck. Albert and his brother, George, had been buying and selling cattle and were in debt. They borrowed from Matilda Hogue, a wealthy widow, and her son Joshua. In order to pay this debt they speculated on the Chicago Board of Trade and lost. Albert and Nancy sold their farm to their son Lewis for $10,400. After the debt was paid they had only a thousand dollars to begin a new life in the West. They moved to Sterling, Colorado, in 1889, where Albert farmed with his sons. They later returned from Colorado to Hamilton, Missouri, where Albert died in 1892. Nancy continued to live in Hamilton with her son, David, until her death on February 27, 1905.

The railroad track heading south on its way to Ottawa. 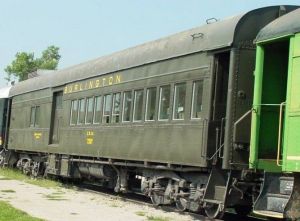 The railroad depot in Dayton, between the store on the left and the elevator on the right.

In 1869 the Ottawa, Oswego and Fox River Valley Railroad began purchasing the right of way through Dayton for their planned route from Aurora to Streator. The portion of the route that went through Dayton was not completed until about 1876.

The Chicago, Burlington & Quincy schedule in the Free Trader shown above lists a stop in Dayton. A passenger could board the train at 7:42 in the morning and be in Chicago at 10:35. After a day’s business or shopping, the 4:30 pm train would get one back to Dayton at 7:37. It made spending the day in Chicago an easy trip as nowhere in Dayton was far from the depot.

Milk bottle, that is.

Farmers throughout the Dayton area sold their milk to the Dayton Dairy. In the early days of the twentieth century, the Green farm had one of the oldest Jersey herds in the state of Illinois. Lyle A. Green, who took over the farm on the death of his father, Isaac, upgraded the herd until many of the cows made their way into the Jersey Registry of Merit. He traveled, often into neighboring states, to purchase pedigreed stock to improve the herd. He became a breeder, building a good reputation for Greenacres Farm of Dayton, Illinois.

The names of the cows give some hint of the  status of these ladies: Poppy Golden Oxford, Royal Mary’s Design, and Belle’s Golden Finance were surely belle dames of the dairy world. Raleigh’s Meg, Raleigh’s Ota and Raleigh’s Lady Brookhill all gave evidence in their names of their descent from Raleigh’s Lord Brookhill, who sired many prolific daughters for Lyle Green’s breeding program.

Despite the use of milking machines, the milking was still finished by hand, and the barn cats were adept at catching their daily ration of fresh milk. The cows were pastured in fields on the east side of the river and twice a day the herd made its slow way across the bridge. After Lyle Green’s death, his brother, Ralph, took over the farm and soon took his son-in-law, Charles Clifford, into partnership.

As you can see, the Green herd was sold in 1944 and, although the Dayton Dairy continued for some years, it, too, is no longer. The milk bottles are now only found at flea markets or on eBay, but they serve as a reminder of one of the major enterprises in Dayton in the first half of the twentieth century.

School’s out for good at Dayton. The 75-year-old school house is going to be sold.

It stands alone on the hill, with grass and weeds growing a foot high, the playground sets turning to rust. The only form of life around is the pigeons in the bell tower.

The school opened in September, 1891. A two-story frame building with a half dozen large rooms, it sits on the foundation of a former school, occupied from 1882 until it burned down the day before Thanksgiving in 1890.

Dayton’s first school, erected in 1849 where the elevator now stands, doubled as a church and a town hall.

Until about five years ago, no church had been built in Dayton since the school served the purpose, or the people went to church elsewhere.

The first board of school directors consisted of David Greene, Richard Stadden and Rees Morgan, who were elected October 6, 1849.

Among the property and equipment to be auction off at 1 p.m. June 25 are several slate blackboards, antique patio blocks and an old school bell.

The youngsters don’t hear the bell clanging on their way to school. Instead, they are bused to the Wallace school, which whom the Dayton school district has consolidated.

In the 1965 school year book, a poem on the school reads: