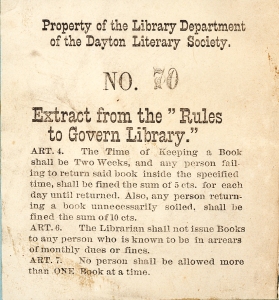 The Dayton Literary Society flourished in the 1870s and 1880s as shown by the clippings below, taken from the Ottawa Free Trader newspaper. Book No. 70, in which this bookplate appears is My Own Times by John Reynolds, published in 1855. Reynolds was governor of Illinois from 1830-1834. It is tantalizing to speculate on what the other 99 volumes might have been.

December 7, 1878, p. 4, col. 5
The Literary meets Friday evening to re-organize and adopt a new constitution. A committee has been appointed to procure more books for the library.

March 15, 1879, p. 8, col. 2
The Literary is in good running order and having good success. The exercises show care in their preparation and talent in their delivery. The library of the society, containing over a hundred volumes of choice reading, is a great benefit to the town. Much interest is taken in it and beneficial results we have no doubt will proceed from its use.

February 5, 1881, p. 8, col. 2-3
The Library Association has reorganized and will soon add a few more volumes to their catalogue. The following officers were chosen for the ensuing year: Mr. Isaac Green, president; Chas. Green, secretary; Harry Green, librarian. An initiation fee of fifty cents for the year will be charged, with no monthly dues. An invitation is extended to all to join the association and enjoy the privileges of the library. It contains many readable and instructive volumes.

February 19, 1881, p. 8, col. 1
The Library Association has adopted a constitution and is receiving many new members. The library is at the store, and Harry is the librarian. He will issue cards of membership at fifty cents each, and allow the holder to read any and all of the hundred volumes in the library.