M’BREARTY – James McBrearty, 65 years old, died at his home in Dayton last Friday morning, his death being due to Bright’s disease, with complications. The funeral services were held Sunday at St. Columba church in Ottawa. The deceased was born in Bedford, Pa., in 1849, and at the age of 14 years joined the 3rd Pennsylvania cavalry. At the close of the war he re-enlisted in the regular army, his services in both being 18 years. In 73 he took part in the battles with the Indians at Wichita, Indian Territory, and other points. He was station agent for the C. B. & Q. at Dayton. The wife and two children, Mrs. E. A. Emmons of Tulsa, Okla., and R. E. McBrearty, of Dayton, survive.1 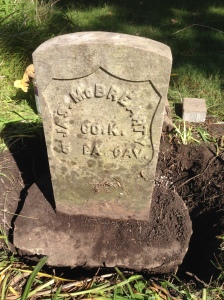