Mrs. Clarine McHale, 33, wife of Edward McHale of Dayton, died at 4 o’clock yesterday afternoon in Ryburn-King hospital, where she had been a patient for a day.

Funeral services will be conducted at the Dayton club house at 2 o’clock tomorrow afternoon. Rev. C. W. McClelland of the First Presbyterian church of Ottawa will officiate. Burial will be in the Dayton cemetery.

Mrs. McHale, whose maiden name was Clarine Wilson, was the daughter of Mr. and Mrs. Vernon Wilson and was born in Normal January 7, 1902. She had lived in the vicinity of Dayton for 30 years.

Surviving Mrs. McHale are her husband, two children by a previous marriage, Earl Swain and Cora Ewain [sic], of Dayton, two brothers, Theodore Wilson and Elmon Wilson, both of Dayton, and her parents. One sister, Mrs. Eva Wirt, died 12 years ago.1 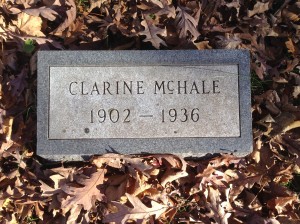 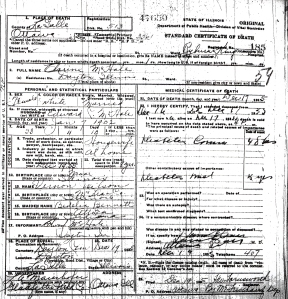