Granma Green, the oldest settler in the county, died Wednesday morning, at the age of 84 year. She was of a kind, benevolent disposition and was well beloved by her wide circle of relatives, friends and acquaintances by whom she will be greatly missed.1

died May 5th, 1886, at the age of ninety three years, five and a half months. She had been confined to bed for about two months, and gradually and gladly passed away like an infant going to sleep. It was her desire to cast off this earthly tabernacle and be present with her Lord.

She retained her faculties to the last, with the exception of her sight, of which she had been deprived for the past seven or eight years. She was never heard to murmur or complain of her misfortune, but on the contrary seemed cheerful and happy.

She was born in Shenandoah county, Virginia, November 15th, 1792. At the age of thirteen she, with her parents, removed to Licking county, Ohio, being in the year 1805, and lived there until the fall of 1829, when she and her companion, John Green and family, removed to this county. A few incidents of their journey will show the hardships and privations of those early pioneer days. We quote her own words from statements made by her to one of her grand daughters, who has recorded them:

“We started from Licking county, Ohio, on the first of November, 1829, for the state of Illinois. There were 24 in the company. Father had gone to Illinois the September before we started and bought land. He and three other men rode on horseback around by Cleveland and along the lakes. When they reached Chicago, where there were only two families besides the garrison, father bought some provisions and in paying for them pulled out quite a roll of bills. That night his brother, Wm. Green, dreamed there were robbers coming and woke the others up, but they refused to start out in the night just for a dream, and he went to sleep again only to dream the same thing again, and when he had dreamed it three times he told them they could stay there if they wanted to, he was going to leave; so they all started and soon after they saw three men following for the purpose of stealing they [sic] money.

“When we reached the ‘Wilderness,’ in Indiana, a man who lived on the edge of the woods told us it was impossible to go on, as the mud was so deep, unless we could travel on the wagons already stuck in the mud; but if we were foolish enough to try it, we must leave ‘those two smart little boys’ (Jesse and David), for we would surely freeze to death. But we did go on and the men cut a new road through the woods for sixty miles, about ten miles a day.

“Then, when we got to Cicero river, we had to take the wagons over with bed cords. One wagon, loaded with mill irons and blacksmith tools, was so heavy it tipped over, and we lost a good many things.

“Then the next place we came to was Sugar creek, and it was so high we had to pull the wagons over with ropes again and cut trees for us to walk on. Then there was a swamp next to the creek that the men had to carry the women over on their backs. Between Iroquois and Nettle creek there were five days the horses had nothing to eat, as the prairie was burnt, and they became so weak they got stuck in a ravine and could hardly pull the empty carriage out.

“One evening we had only bread and tea for supper, but that night father came back with corn and beef that he had obtained at Holderman’s Grove, and we were the happiest people you ever saw. We spent the next night at the Grove and the next day home, at what is known as William Dunavan’s farm.”

She lived in the town of Rutland something over a year when she removed to Dayton, being at this place at the time of the Black Hawk war in 1832. Of this war she says: “On the 16th of May, 1832, the girls and I were at the spring, near where the feeder bridge now stands, when Eliza came down on horseback and told us that the Indians were coming, and we would have to go to Ottawa immediately. Then we went to a place a couple of miles below Ottawa and stayed there all night, and the third day returned home again. This was Sunday, and the next day the men made a stockade around the house out of plank. After it was finished they tried it to see if a bullet would go through it, and as it did, they hung feather beds all around. There were about sixty people here at the time, and we were so crowded that they had to sleep on tables, under the beds and all over the house.”

Mr. Green had intended to remain in his improvised fort during the war, but at about twelve o’clock at night, hearing of the massacre on Indian creek, and fearing there might be too many Indians, all those in the fort went to Ottawa. “When we got to Ottawa, there was no fort there, only a log cabin on the south side of the river, but they soon built a fort on top of the hill. We went to the fort, but there was so much confusion there that we had the log house moved up on the hill and lived in it. The next day a company of soldiers from the southern part of the state passed through Ottawa on the way up the river.”

Grandma Green bore all the hardships and privations incident to the settlement of two new countries and lived to see the development of this vast prairie country far, very far beyond her anticipations. When she came here she supposed that in time she might see the country settled around the skirts of timber, but never in her early days did she anticipate seeing the prairies settled up.2 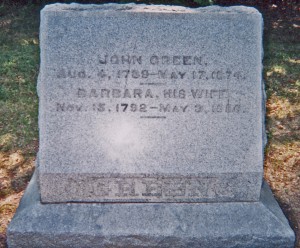 Additional information about Barbara Green may be found here.