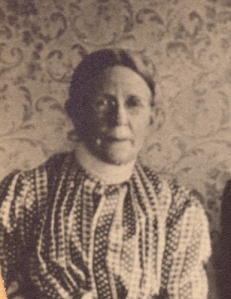 Rebecca Green Trumbo, or “Aunt Beck” as she was known to her niece, Maud, was the tenth child and sixth daughter of John and Barbara Green. She was born across the river from Dayton, in Rutland township, September 8th, 1830, the first of their children to be born in Illinois. She grew up with a number of Dunavan children near her own age, all of them her aunts and uncles, children of her older sisters, Eliza and Nancy. She was also very close to her brother Joseph, who was two years older. When Joseph went with the Dayton party to the gold fields in 1849, she wrote often, teasing him about some of the local girls who missed him very much.

In return, Joseph said
“(I want you to explain yourself about what letter you had reference to when you spoke of Miss E J B receiving that letter is entirely beyond my comprehension I am in the dark on the subject if it is anything relating to me I would like to understand it –  as to who gets Miss E. J. B. is the least of my concerns But as far as I know she is a very nice girl”

He also added some very sage advice:
“(Becks be carefull here after about whittling allways whittle from you and you will not be apt to cut your fingers — always take it moderate for a few days until you get your hands tuffend to it”

Rebecca and Rachel, her sister, filled their letters with wishes for the men to come home:
“O Joseph if you could only be here next saturday night we have first rate cotillion parties last saturday evening we had three musician’s and first rate music (and some pretty good dancing) but o how we miss you at them. do hurry and satisfy yourself and come back to gladden our hearts dont be too hard to satisfy either for it is to hard for near and dear friends to be seperated for gold or anything else aint it”

On October 15, 1854, Rebecca married Oliver W. Trumbo. As if the three Green-Dunavan marriages had not complicated relationships already, in 1865 her little brother Isaac would add another Green-Trumbo marriage when he married Oliver’s sister, Mary Jane.

Frankie died at the age of seven of a malarial fever. From her obituary:
“Frankie was the light and joy of her home, and by her death a place is left vacant that cannot be filled until that joyful meeting of families on the other shore. Having attended school but a little over a year she had reached a grade seldom attained by a child of her age, and won the warmest love from teachers and schoolmates.”

Jessie married Wilmot Van Etten June 13, 1888. They lived in Mendota. Rebecca lived with them after Oliver died, and she died there September 25 1916. She is buried in the Dayton Cemetery.