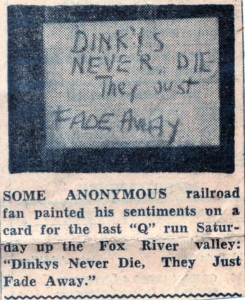 On February 2, 1952, the Burlington passenger train that had linked Dayton with Ottawa and other towns from Streator to Aurora for 82 years carried its last passengers. The service had dwindled to two trains a day, one northbound and one south. Cars and trucks had taken much of the express traffic, as well as the passengers. C. C. Tisler, a local historian who wrote for the Ottawa Republican-Times, wrote two articles about the demise of the dinky, saying:

The puffing switch engine, with its steam and smoke and clank and bang and roar also are vanished and been replaced with the plebian Diesels. The Burlington has gone modern – but old time railroaders are a bit nostalgic about the whole affair.

You can read the complete articles, with photographs, here.