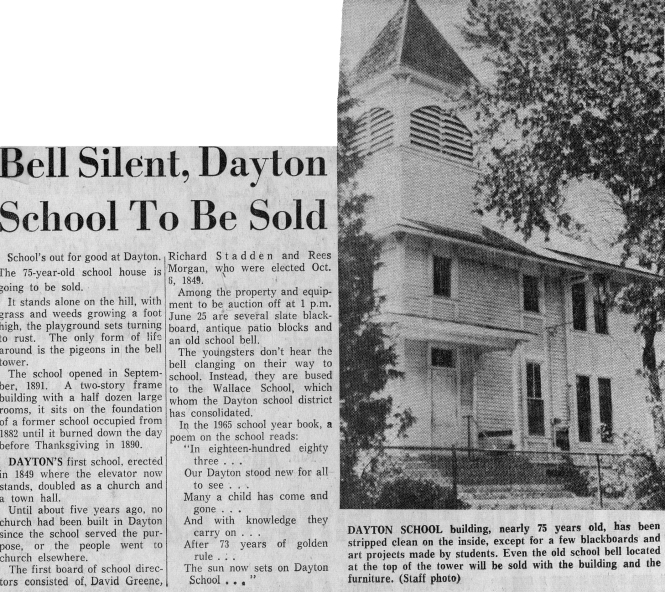 School’s out for good at Dayton. The 75-year-old school house is going to be sold.

It stands alone on the hill, with grass and weeds growing a foot high, the playground sets turning to rust. The only form of life around is the pigeons in the bell tower.

The school opened in September, 1891. A two-story frame building with a half dozen large rooms, it sits on the foundation of a former school, occupied from 1882 until it burned down the day before Thanksgiving in 1890.

Dayton’s first school, erected in 1849 where the elevator now stands, doubled as a church and a town hall.

Until about five years ago, no church had been built in Dayton since the school served the purpose, or the people went to church elsewhere.

The first board of school directors consisted of David Greene, Richard Stadden and Rees Morgan, who were elected October 6, 1849.

Among the property and equipment to be auction off at 1 p.m. June 25 are several slate blackboards, antique patio blocks and an old school bell.

The youngsters don’t hear the bell clanging on their way to school. Instead, they are bused to the Wallace school, which whom the Dayton school district has consolidated.

In the 1965 school year book, a poem on the school reads: