Milk bottle, that is.

Farmers throughout the Dayton area sold their milk to the Dayton Dairy. In the early days of the twentieth century, the Green farm had one of the oldest Jersey herds in the state of Illinois. Lyle A. Green, who took over the farm on the death of his father, Isaac, upgraded the herd until many of the cows made their way into the Jersey Registry of Merit. He traveled, often into neighboring states, to purchase pedigreed stock to improve the herd. He became a breeder, building a good reputation for Greenacres Farm of Dayton, Illinois.

The names of the cows give some hint of the  status of these ladies: Poppy Golden Oxford, Royal Mary’s Design, and Belle’s Golden Finance were surely belle dames of the dairy world. Raleigh’s Meg, Raleigh’s Ota and Raleigh’s Lady Brookhill all gave evidence in their names of their descent from Raleigh’s Lord Brookhill, who sired many prolific daughters for Lyle Green’s breeding program.

Despite the use of milking machines, the milking was still finished by hand, and the barn cats were adept at catching their daily ration of fresh milk. The cows were pastured in fields on the east side of the river and twice a day the herd made its slow way across the bridge. After Lyle Green’s death, his brother, Ralph, took over the farm and soon took his son-in-law, Charles Clifford, into partnership. 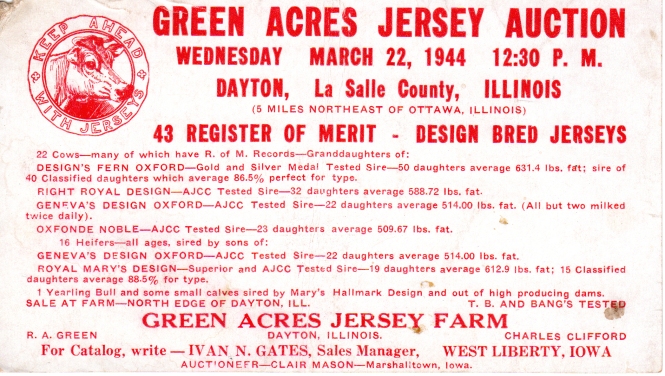 As you can see, the Green herd was sold in 1944 and, although the Dayton Dairy continued for some years, it, too, is no longer. The milk bottles are now only found at flea markets or on eBay, but they serve as a reminder of one of the major enterprises in Dayton in the first half of the twentieth century.