Shortly before noon, Monday, O. W. Trumbo, who had been a resident of Dayton township since 1853, passed away, aged 81 years, death resulting from old age. Mr. Trumbo had been in poor health for a year or more, but was not confined to his bed until within a couple of weeks. The funeral took place from the family residence in the village of Dayton at 1 o’clock Wednesday afternoon. Mr. Trumbo was a native of Rockingham, Va., and was the only surviving brother of M. P. Trumbo, father of the sheriff of the county. More than fifty years ago he was married to Miss Rebecca Green, of Dayton, Ohio, who with one daughter, Mrs. Van Etten, survives him.1

In the death of O. W. Trumbo, just before noon today, at his home in Dayton, La Salle county loses another of those old residents who have lived here continuously for over half a century. His birth place was back in Rockingham county, Virginia, where he was born on April 5, 1824. Thus at his death he had attained the ripe old age of 81 years. He was a man of twenty-eight when he came here in 1850, his parents following in 1852, and the family locating on Buck Creek. For six years after coming to La Salle county Mr. Trumbo was engaged in farming. From that time on until 1873 he was engaged with the Greens in the woolen mill business at Dayton. Following that time he again went back to farming. In 1854 he was married to Miss Rebecca Green. She survives him, together with one unmarried daughter, who resides at Batavia. In his time Mr. Trumbo held many local positions of trust, His only surviving brother is M. P. Trumbo, the father of Sheriff Trumbo.

While he has been in rather poor health for some two years the immediate sickness that preceded his death was of short duration. He was in Ottawa some two weeks ago. The funeral service will be held from the house at 1 o’clock Wednesday afternoon.2 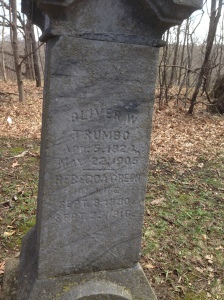 Additional information on Oliver W. Trumbo may be found here.