AGED WAR VETERAN SUMMONED BY DEATH
JOHN B. BREESE PASSED AWAY AT HIS HOME IN DAYTON
SERVED IN THE CIVIL WAR
End Came at 5:30 O’clock Wednesday Afternoon
Was Resident of La Salle County Forty-nine Years.

The ranks of those who fought for the nation in the war of the rebellion, is rapidly diminishing in numbers. John H. Breese, aged eighty-four years, a veteran of the Company C, First Illinois artillery, passed away at his home in Dayton, Wednesday afternoon at 5:30 o’clock. The aged man’s death was the culmination of a lingering illness, due to old age.

Mr. Breese was born October 12, 1830, and spent the greater part of his life in this county. He enlisted in the First Illinois artillery in August, 1862, a year after its organization, and saw active service in many of the great battles of the civil war. At the close of the war in 1865, he was mustered out, and returned to La Salle county, where he farmed near Dayton.

For the past forty-nine years the deceased has lived on the same homestead in Dayton township, and was a frequent visitor to Ottawa. He was well known and highly esteemed by a host of friends here.

He is survived by three sons, William L. Breese and Walter D. Breese, both of Aurora, and Ellis E. Breese, of Dayton, and one daughter, Mrs. Cora Wilson, of Hesperia, Michigan. He also leaves a sister, Mrs. Mary Tucker, aged eighty-seven years, residing in Dayton.

The deceased was a member of the Seth C. Earl Post, G. A. R., which lodge will probably have charge of the funeral services. The time of the funeral will be announced later.1

John H. Brees, who succumbed at his home in Dayton last Wednesday evening, was interred at 10 o’clock Saturday morning, in Dayton. The Seth C. Earl Post, G. A. R. had charge of the funeral ceremonies, which were held at the late home and at the grave. Burial was made in the Dayton cemetery.2

BREESE – John H. Breese, veteran of the Civil war, and for many years resident of Dayton township, died at his home in that place October first, after an illness of four months, due mostly to his extreme age. The funeral was held at the home Saturday afternoon, and was in charge of Ottawa G. A. R. post. The deceased was born in Middlesex county, New York, October 12, 1830, and came to LaSalle county before the Civil war. He enlisted August 23, 1862, in Co C – Capt. Houghtaling’s battery, organized in April, 1861 – First Illinois Artillery, and served his country nobly until the close of the war, his discharge dating June 12, 1865. He became a member of Seth C. Earl post in Ottawa December 1865. Mr. Breese is survived by his wife and four children – William L. and Walter D., of Aurora, Ill., Ellis E., at home and Mrs. Cora M. Wilson of Hesperis, Mich. Also by a sister, Mrs. Mary E. Tucker, of Dayton, aged 87 years.3 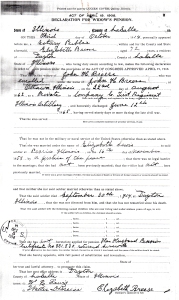 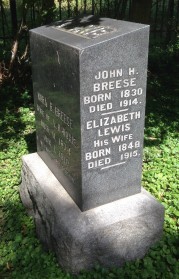