Nine Deaths in Ottawa Area Caused by Heat
F. M. Crouse, 74, of Rep-Times Staff is Victim
Subscription Solicitor is Found Dead in His Room
Others Succumb in Nearby Towns

Nine heat deaths were reported in the Ottawa area today in the wake of yesterday’s record-breaking 112-degree temperature. The victims included Fred M. Crouse, 74, employed for the last eight years in the circulation department of the Republican-Times, who was found dead in his room, death being attributed to a cerebral hemorrhage superinduced by the extreme heat; Carl Endburg, 69, of Utica; Frank Hoag, 66, Serena; William Drinan, 54, Kinsman; Arthur Hill, 38, Yorkville; Mrs. Philappa Blee, 82, found dead in her Oglesby home; Thomas Fitzgerald, Peru restaurant cook, who died in a jail cell, where he was held following an outbreak caused by the heat; Mrs. Jennie Ellena, 76, Standard; and Theodore Krugulski, La Salle.

[a number of paragraphs omitted]

Frank Hoag, 66, life long resident of Serena township and former janitor of the village school, died suddenly at 6 o’clock last night at his home on U. S. Route 52, near the village. He had been ill for two years.

Last night he finished light chores around his barn and then lay down on a couch, complaining of the heat. He died shortly after.

Funeral arrangements are not complete.

Mr. Hoag was born in Serena township October 14, 1869, a son of Charles and Mary Hoag, early day residents of the township. He was a laborer. For 10 years Mr. Hoag was janitor of the village school. He was not married.

Mr. Hoag is survived by a brother, Adam Hoag, of Bloomingdale, Mich. and two sisters, Mrs. C. B. Stockham, also of Bloomingdale, and Mrs. Lillie Carter of Serena with whom he made his home.1 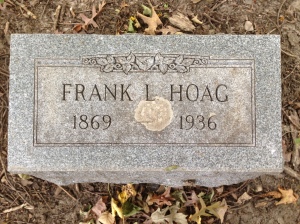 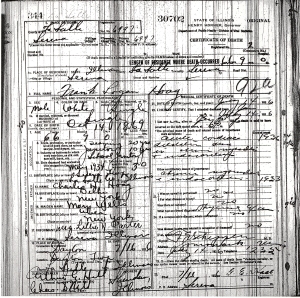 Further information on Frank Hoag can be found here.