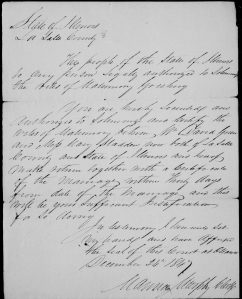 On December 24, 1847, David Green, son of John and Barbara (Grove) Green, married his cousin, Mary Stadden, daughter of William and Judah (Daniels) Stadden. They lived in Dayton, in this house.

They had ten children, five girls and five boys.

John William Green was born about March 25, 1854 and died May 8 of that same year. He is buried in the Dayton Cemetery.