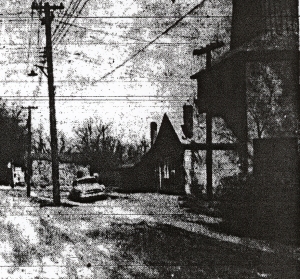 Concrete sidewalk in front of elevator

Our sidewalks have been repaired to some extent during the past few weeks. They had been in a somewhat dangerous condition.

A new sidewalk has been constructed down the hill under the railroad bridge. It is quite an improvement over the old rickety walk that has been ornamenting the hill for so long.

The young folks will hold an entertainment Friday evening, for the benefit of the sidewalks.

The young folks will give an entertainment at the schoolhouse Friday evening for the benefit of the sidewalks in this village. The temperance play, “On the Brink,” is on the programme.

One hundred and fifty people attended a lawn social given at the home of Mrs. E. A. Dallam in Dayton Friday evening. A program of unusual merit was rendered, and Ottawa people were among the principal participants in the entertainment. The hours were from 8 until 11 o’clock, and ice cream and cake were served. The Ladies’ Aid society of Dayton assisted Mrs. Dallam as hostess, and $25.00 were cleared, which amount will go towards the sidewalk fund.

Many Ottawa people attended the dancing party given at the residence of Rush Green in Dayton, Friday evening. The affair was for the benefit of the construction of a cement sidewalk from the elevator to the school in Dayton and is the third of the parties to be given. Like the others, it was a huge success and a neat little sum was netted towards the sidewalk fund. The evening was spent at dancing, Dwyer’s orchestra, of this city, furnishing the music. Refreshments consisting of ice cream and cake were served during the evening. The arrangement committee consists of William Meagher, Frank W. Lansing, William Buckley, Jr., R. A. Carter, James W. Collison and Harry W. Tanner.

Contractor Green, who is building concrete sidewalks in Dayton, has the job nearly completed. This will be a fine improvement for the village to the north.

The Woman’s club of Dayton will hold another lawn social Wednesday evening, July 22, at the home of E. A. Dallam. Ice cream and cake will be served, and there will be a Victrola concert. The proceeds to be devoted to cement sidewalks for Dayton.