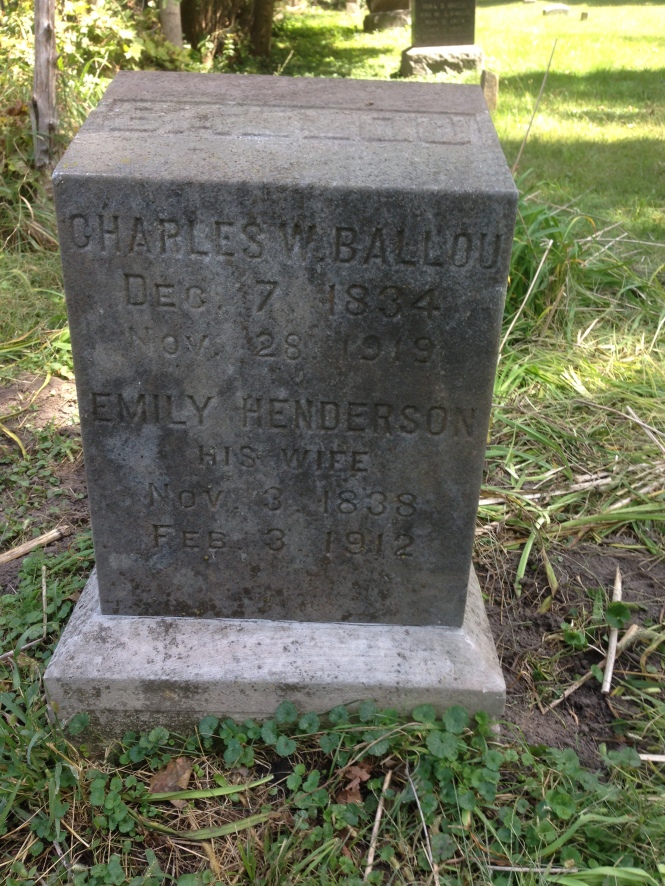 BALLOU, CHARLES WESLEY
Charles Wesley Ballou, formerly a resident of Dayton, who died at the Masonic Home, at Sullivan, Ill., of pneumonia, November 28th, was buried yesterday afternoon in the Dayton cemetery. Freedom Lodge, No. 194, A. F. & A. M., had charge of the services at the grave.
The deceased man was 84 years and 11 months of age at the time of his death, and prior to his entering the Masonic home had been a resident of Dayton, where he was well known.1

BALLOU, EMILY HENDERSON
Mrs. Emily Henderson Ballou was born at Richmond. Vermont, November 3, 1839. She was married twenty years later, 1869, to Charles W. Ballou and the same year she and her husband came to Walton township, La Salle County, Illinois, to set up a home in what was then the West; and ever since have been residents of this county; since 1866 this township has been their home. Nine years ago, Mr. and Mrs. Ballou took up their residence in Dayton village and here, as in the earlier years spent in this community, have endeared themselves to associates, have been and have enjoyed good neighbors and friends. Mrs. Ballou died Feb. 3, 1912, aged 73 years, 3 months, and she leaves to mourn her loss, her devoted husband and two nieces, Mrs. Georgiana Howe of Richmond, Vt., and Mrs. Jessie Hazelton of Waterbury, Vt., Mrs. Ballou being the last of her generation. She was a queen in her home, never wearied of the duties of hostess to friends or relatives, and many pleasurable days were spent by those who loved her at the home over which she reigned. Besides the sorrowing relatives hosts of friends will miss the life gone.2

C. W. Ballou came to this county in 1856 from Addison County, Vt., where he rented a farm four miles north of Utica, remaining there one year. He then returned to Vermont and was married Aug. 25, 1857, to Emily Henderson, and remained there a year, visiting and farming, and in 1858 settled in Waltham Township La Salle Co., Ill., and farmed there until the spring of 1866. He has since resided in Dayton Township, first living on a farm on section 6 for one year. He then moved to Dayton Village, remaining there until December 1838 [sic], engaged in manufacturing horse collars. He then moved with his family to the place of A. S. Henderson, which he has since rented. He is a Master Mason. He has served as School Trustee for six years. His parents were P. C. and Hannah (Bird) Ballou, natives of New Haven, Conn., his father of French ancestry. His father died Oct. 1, 1884, aged seventy-eight years, and his mother died Feb. 22, 1882, aged seventy-five years. Mrs. Ballou was born Nov. 3, 1838, and was the fifth child in a family of seven children of John and Martha (Noble) Henderson, both of whom were natives of Massachusetts and of Scotch descent. Her father died in Richmond, Vt., in 1853, aged seventy-one years, and her mother died at the age of fifty-two years in 1850. Politically Mr. Ballou affiliates with the Democratic party.3