In 1931 La Salle county celebrated the centennial of the founding of the county. The La Salle County Centennial Association was organized to put on a suitable celebration. The president of the centennial association was Mrs. Ralph A. (Ruth) Green, of Dayton. Other members of the committee were Al Schoch, former mayor of Ottawa, Etta Dunaway, and A. M Corbus, owner of Corbus Drug Store in Ottawa. 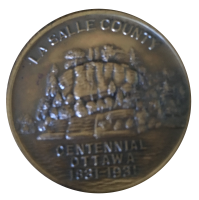 As part of the celebration a commemorative coin was issued. The front had a picture of Starved Rock and the back a plow and wheat sheaf. There were a number of committees created, each with supporters from each of the townships. Those from Dayton were Mrs. L. A. Green, Mrs. Nettie Masters, Miss Maude Green, Mrs. Hattie Poole, Mrs. [sic] Emma Fraine. The largest committees were those responsible for the pageant, a mammoth endeavor which was held at the La Salle County Fairgrounds the evening of June 5, 1931. It consisted of a series of episodes retelling incidents in the history of the county. The second episode reenacted the arrival of the Green party in 1829 and their subsequent settlement in Dayton. Each pioneer in the episode was represented by a direct descendant.

The Membership Roll found at the back of the souvenir program listed everyone who had purchased a membership certificate, as shown above. The list includes Mrs. Clara Fish Heath, though she apparently did not make use of her certificate, as it was found among Ruth Green’s papers, long after the centennial was a distant memory.