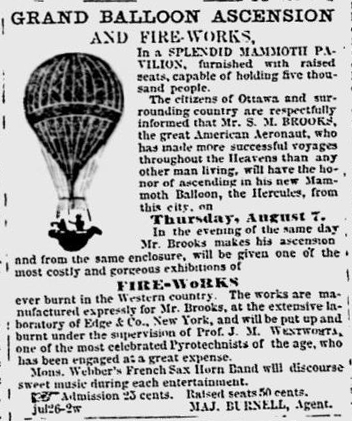 This announcement, which appeared in the Ottawa Free Trader 161 years ago today, would surely have caused great excitement in Dayton. Mr. S. M Brooks, the great American aeronaut was coming to town. A balloon ascension, followed by a fireworks display, would have attracted people from far and wide, and many Dayton people would surely have been among the spectators.

Silas M. Brooks popularized ballooning all over Illinois and Iowa. He would begin with a lecture on aeronautics. Following that, the balloon would be inflated and Brooks would take his place in the car. The ropes would be released and Brooks would ascend majestically into the heavens.

At least, that is how the show was supposed to go on. Balloon ascensions were dangerous. Just the previous year, in Chicago, a balloon ascension by Brooks took the aeronaut up “about a mile.” The balloon ran into trouble and was entangled with a telegraph wire, when the car, and Brooks, fell to the ground. The freed balloon rose into the skies and, despite a reward for its recovery, was never seen again.

Balloons were gaily decorated and some launched accompanied by music. It was also common to launch unmanned balloons. Sometimes a number of small balloons were launched, to the spectators’ delight. With the balloon and the fireworks, it was the Fourth of July three weeks late.