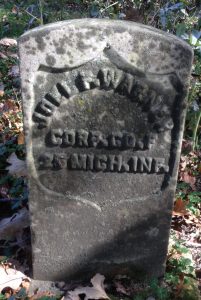 With no surnames in common, it might be hard to realize that the Warner, Wolfe, Tanner, and Luce families in the Dayton cemetery are related, but they represent a couple and their three married daughters.

Joel Foster “Faut” Warner was born June 14, 1831, in Syracuse, New York. On July 3, 1856, he married Mary Ann Inman in New Buffalo, Michigan. She was born January 15, 1839, in Butler County, Pennsylvania. Joel served in the Civil War from Michigan in Company F, 25th Michigan Infantry. He was wounded at the battle of Pumpkin Vine Creek. After his discharge in 1865, he returned home and moved to Kendall County, Illinois, where he farmed. In 1877, he fell under a train and his left leg had to be amputated four inches below the knee. Following this accident, he gave up farming and supported himself with various jobs. In 1882 he moved to Dayton, where he was able to work as a fisherman. He died September 26, 1911 and was buried in the Dayton cemetery. Mary lived with her daughter Ada in Ottawa until her death on January 20, 1918. She too was buried at Dayton.

Twin sister Ada married George Wolfe June 19, 1883 in Kendall County, Illinois. They also moved to the Dayton area, settling across the river in Rutland township. George died January 5, 1909 in Ottawa and was buried at Dayton. No record has been found of Ada’s death but presumably she is buried with her husband.

Daughter Edith Warner was born May 22, 1860 in Three Oaks, Michigan. She married Edgar H. Luce, a farmer, on September 24, 1881 in Kendall County, Illinois. Edgar died November 23, 1899 and was buried at Dayton. After his death Edith moved to Ottawa, where she died on April 14, 1937 and was also buried in the Dayton cemetery.