The following article about the Dayton Woolen Factory is from the Ottawa (Illinois) Free Trader, February 11, 1865, p. 2, cols 3-5

The grinding of grists and manufacture of flour came far from satisfying all the wants of a country situated as this was fifteen and twenty years ago. No country in the world, for instance, was better adapted to wool growing, and, considering the difficulty and expense, at that date, of procuring woolen goods from the east, no country stood in more need of facilities for making available the abundant fleeces at their own door. Mr. Green had come from a region where woolen factories were common, and seeing how much the country needed one, inferred it would be willing to support one. Accordingly, in 1840 he commenced the erection of a woolen factory, and in 1841 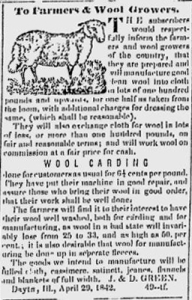 had it in operation. The building was of wood, 32 by 50 feet, three stories high, and equipped with two sets of machinery.
It made no large pretentions. Its principal business was to cleanse and card wool for the farmers in the vicinity, or manufacture it into cloths on shares. Its fabrics, however, were so well made, that quite a demand grew up for them in the market, and for the last half dozen of years the demand had been beyond the capacity of the factory.
It was not, however, until the breaking out of the present war, and the rapid appreciation, in consequence, of the price of all kinds of woolen goods, and with it, the correspondingly rapid increase in the production of wool that this demand became not only pressing but overwhelming. Stimulated by the high prices, the production of wool in the country was doubling every year. This pressure on the factory became so annoying, that but one of two courses remained open: either to give up all pretense of meeting the demand; or enlarge proportionately the capacity of the factory. The latter alternative, after due deliberation, was adopted, and as the old building was too contracted for the purpose, early last spring was laid the foundation for the splendid new factory at Dayton, the recent completion of which mainly accords the occasion for this article.

Before proceeding with this new establishment, however, it is necessary to relieve ourselves from what would soon grow into an embarrassment. Thus far we have only named John Green in connection with all these operations at Dayton. We are unintentionally doing injustice to others. Mr. Green is a man who, though still hale and hearty, had turned the scriptural three years [sic] and ten, and it is not probable that at his age he should retain the enterprise and vigor of his earlier days, to engage in vast new projects such as we are about to describe. Mr. G., when he came to this country, brought with him sons and daughters; and as his mills were built up and were torn down and rebuilt, his sons grew up apace to vigorous manhood. Full of the enterprise and energy of their honored progenitor, there was no need of going from home to find a suitable field for their activity. As early as 1840, we find the name of “J. & D. Green,” and “J. Green & Sons,” on their sign boards and attached to their business paper. And thus the firm remained until the new factory of which we are about to speak was projected, when, for obvious reasons, some other names were admitted into the firm – those of O.W., M.B., & C.A. Trumbo, and that of Mr. Samuel J. Allen, formerly and for several years foreman in the weaving department of the well known establishment of the Harris’, at Wilmington, Rhode Island. To introduce and properly handle the vast amount of new and complicated machinery which the new factory would require, involved the necessity for new knowledge and experience, and there is reason to believe that in this respect the firm have been most fortunate in the choice of the last named associate. Henceforth, the firm name is “J. Green & Co.”

The new building is of stone from the celebrated quarries of Joliet, handsomely laid in courses. Its dimensions are, – main building 55 by 105 ft., five stories high, with a dye house at the northern end, of the same stone, 32 by 55 ft., one story high. The walls are three feet in thickness at the base, tapering as they rise to 20 inches at the apex. The windows, which of course are numerous, have handsome cut-stone caps and sills, and the cornices being richly ornate, the building presents an exterior view both handsome and imposing.
The external view, however, gives but a faint impression of the vastness which overwhelms one on entering the interior. We pass to the ground floor, and before us is a room 50 by 100 feet, divided apparently into large aisles by rows of stout pillars supporting huge beams and girders overhead. All teems with life and machinery, uproarious with its buzzing, noisy clatter. We ascend to the second story, and here again is the vast hall, with its rows of pillars, and aisles, and huge beams, and busy hum and buzz and clatter; but we notice all the machinery is different, and are puzzled to know what connection it can have with that below. We ascend to the third story, and find another vast hall, the counterpart of the others, differing again only in the new and apparently still more complicated machinery. And so we go to the 4th and to the 5th story – to the very drying loft, and at each ascent emerge into the same large room but with all its machinery and operations different. We have now walked over a space which, spread out in one flat surface, would make an acre, and hold 30,000 people. At every point we are struck with the admirable arrangement and adaptation of the building to the purpose for which it is designed. The manager, in his little corner on the first or second floor, can communicate with all parts of the building without moving from his seat. Huge elevators convey easily and noiselessly any article from one floor to the other as it is needed. The arrangements for ventilation and heating are perfect. Not a stove or spark of fire is found in this whole vast building. Off beyond the north end is a huge furnace, and over it a steam boiler. From this along the walls on all sides of the building, steam is conveyed in pipes throughout the building, and so perfectly is the heat under control, that at all times, be the weather intensely cold or mild, exactly the same temperature can be maintained in every room from the bottom to the top. This steam boiler not only warms the building, but heats, by jets of steam, all the hot water needed about the building, which is not a little. We know little about the perfection which modern improvements have attained in factory buildings, but if any can be more perfect in all their appointments than this, we are unable to conceive it.

HOW CLOTH IS MADE