MRS. TIMMONS, 78, IS VICTIM OF PARALYSIS

Mrs. Annie Timmons, 78, widely known Marseilles resident and mother of Mrs. John M. Nicholson, local business woman, died at 7:08 a. m. Monday at the family home on Washington street. Her death was attributed to a paralytic stroke which she suffered Wednesday afternoon. As late as Saturday Mrs. Timmons’ condition was considered favorable, with the result that her death came as a shock.

Funeral services will be conducted at 9 a. m. Wednesday at St. Joseph’s Catholic church in this city [Marseilles]. Rev. R. D. O’Loughlin, pastor of the church, will officiate. Interment will be in the family lot in Dayton, Ill.

Annie Grace, daughter of Julia and James Grace was born at Ottawa, Ill., March 24, 1855. She was one of six children and was a twin, her twin brother having died in infancy.

Her parents, natives of Ireland, were among the first to settle in La Salle county. By vocation her father was an undertaker but upon locating at Ottawa, embarked in the carpenter trade. He was the first to build a house of siding and plaster, which was occupied by his family.

Mrs. Timmons, as a child and young woman, received her education in the Chicago schools. Her parents later returned to Ottawa and it was there that she was united in marriage with James H. Timmons at the age of 23.

The young couple made their home in Marseilles, later moving to Dayton, Ill. In 1901 they returned to Marseilles, where her husband was prominent as owner and operator of the Schultz hotel on Young street, which at that time was widely known as a hostelry.

The decedent’s husband died in 1908 [sic], and is buried at Dayton. Mrs. Timmons is survived by two daughters, Mrs. John M. Nicholson and Mrs. Effie Fenton, both of Marseilles, one son, Harry Timmons of Moline, seven grandchildren and two great-grandchildren. She also leaves one half-brother, William Ryan of Waterloo, Ia.

With the death of Mrs. Timmons, tribute from all sides have been paid to her as a woman, who in spite of seeing most of her grown children taken from her by death, displayed a smiling courage and fortitude. Mrs. Timmons was universally loved and particularly by young people, who were attracted to her because of her wit and optimism.

Because of Mrs. Timmons’ love of youth, those who will carry her to her last resting place will be young men who are friends of the family.1 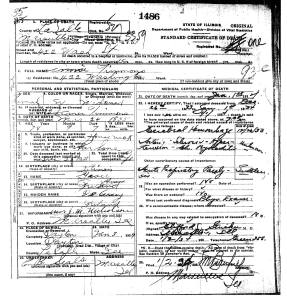