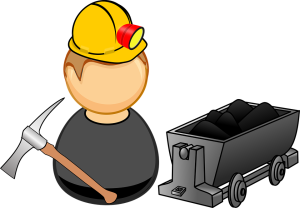 Louis P. Morel married Marie Fritsch in Chicago on December 16, 1884. According to their marriage application both were born in Chicago, but Marie, at least, was born in France. She probably came from the Alsace region that was the home of many French people in the Somonauk-Serena area, close to Dayton. It’s also possible that Louis was related to some of the Morels living in the area.

In 1885 they moved to Dayton and bought a small three-room, one-story, frame house on lots 1 and 2 in block 7 of the original town of Dayton. [See the map on the home page of this site for location of house.] The lot also included a coal house and a well, and a board fence surrounding it all.

On November 17, 1897, Louis was taking coal from a small surface mine near Dayton, when a mass of earth caved in on him, crushing him to death. He was buried in the Dayton cemetery, with his daughter Emma. [See his cemetery page on this site for more information.]

Marie, the widow, inherited the personal property – beds, bedding, kitchen equipment, furniture, and the only explicitly named item – the sewing machine. She sold the house for $300 and moved to Goble, Columbia County, Oregon with the children. She may have chosen this place because there were other Morel families there, perhaps related to her husband, although no such connection has yet been found.