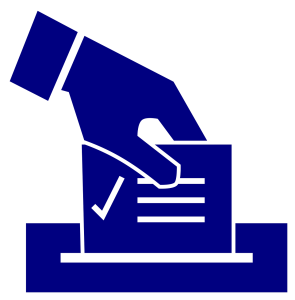 Women and non-whites need not apply:

At any and all elections held in this State, all white male inhabitants above the age of twenty-one years, and having resided in the State six months next preceding such election, shall enjoy the rights of an elector, whether such elector has been naturalized or not;1

There was no such thing as a secret ballot:

Electors shall vote, by first announcing their own names to the judges and clerks of the election, and then the names of the persons for whom they wish to vote; and the clerk shall enter their names and votes accordingly: Provided, That a voter may vote by presenting an open ticket to the judges, containing the names of the persons for whom he votes, and the offices; and the said judge shall read the same to the voter, and the clerks, with the assent of the voter, set the same down in their books, as in other cases.2

And precautions were taken, should things get ugly:

For the preservation of order, as well as the security of the judges and clerks of the election from insult and abuse, it shall be the duty of any constable or constables residing within the precinct to attend at all elections within such precinct . . .3

Judges could impose a fine of up to $20 on any persons who persisted in conducting themselves in a disorderly or riotous manner after having been warned. If they refused to pay, they could be jailed for up to twenty days, or until the fine was paid.