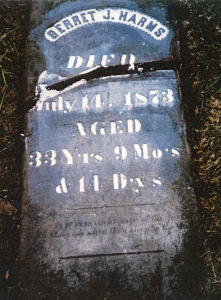 There is a tombstone in the Dayton cemetery for Gerret J. Harms. There are no other Harms burials. He does not appear to be related to anyone else buried in the cemetery. There is no obituary for him in the Ottawa paper. Where did he come from, and how did he come to be buried in Dayton?

There were no Harms families in La Salle county, but Gerret did have family here – his wife’s family. Gerret was born in Hanover about 1839/40. He came to the United States around 1861, and went to Boston, where he met and married Marina Barends on August 22, 1863. Marina came from a Dutch family, many of whom anglicized their name to Barnes. They had two children, Hannah, born in 1865, and Gerret, born in 1868.

Whether Gerret was a farmer in Germany or not, he appears to have wanted to go into farming. Marina had four brothers who had gone west and settled in La Salle county, Illinois, in Dayton and Rutland townships. Apparently their reports were favorable, because in 1870 Gerret and Marina were living west of the city of Ottawa where Gerret did not own land, but was employed in farming.

They had another child, Frederick, born in 1873 in Ottawa, but then, on July 14, 1873, Gerret died. Although he lived some distance from Dayton, two of Marina’s brothers lived in Dayton township and they must have arranged for Gerret to be buried in the village cemetery. By 1880, Marina and the children had returned to Boston, where much of her family had settled. She never remarried but lived in Boston until her death, November 2, 1893.

While they were living in Illinois, apparently daughter Hannah made a deep, if youthful, impression on her cousin Peter Barnes, son of Marina’s brother Nicholas, as Peter came to Boston and married Hannah on March 2, 1893. 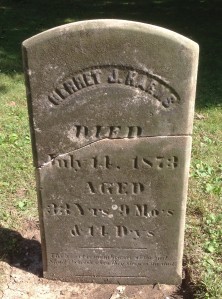