On this Memorial Day weekend, the veterans buried in the Dayton Cemetery take the spotlight. One of them is John W. Channel. He was born March 10, 1849 in Licking County, Ohio and came to Illinois with his parents in 1851.

In April, 1865, at the age of 16, he lied about his age to enroll in Company E, 3rd Illinois Cavalry. In May, the Regiment went to Minnesota where he participated in an Indian expedition through Minnesota and Dakota Territory. They arrived back at Fort Snelling in October, where he was discharged.

In 1870, he was working in the Green Woolen Mill as a cloth finisher. In 1881 he moved to St. Louis where he was engaged in the manufacturing of horse collars, with J. W. Denning & Co. He sold his interest to his partner on account of poor health, and returned to Dayton  to assume the management of the Basil Green tile works. When the firm of Hess, Crotty and Williams was organized, Mr. Channel became the superintendent of the works. He remained in this position until the Standard Fire Brick Co. was organized, when he left the employ of Hess, Crotty and Williams, to become president and general manager of the new company. In 1898 he disposed of his interest in the Standard Fire Brick Co. and purchased the tile factory of Basil Green of Dayton, in company with his son-in-law, Arthur T. Ladd, operating under the firm name of J. W. Channel & Co. He died November 22, 1900 and is buried in the cemetery, as is his wife. 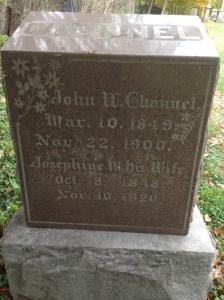 3 thoughts on “On Memorial Day We Honor Another Veteran”