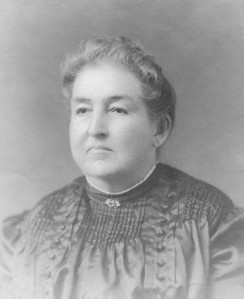 Mrs. Isaac Green, well known resident of La Salle county, mother of attorney Ralph A. Green, of this city, died at 6 o’clock this morning at her home on East Main street. The cause of death was apoplexy. She was taken suddenly sick one week ago.

Mary J. Trumbo was born June 31, 1840, in Rockingham county, Virginia, and came to Illinois with her parents in 1853. She was married to Isaac Green in 1865 and resided on a farm in Dayton township until 1907, when she moved to Ottawa. Her husband died in September of 1904.

The deceased is survived by the following children: Maud V., who resides with her mother; Lyle A., who resides on the homestead in Dayton; Ralph A., of Ottawa, and Barbara J. Masters, of Fairbault, Minn. One daughter, Grace E., died in 1896. Moab P. Trumbo, of Ottawa, is a brother of the deceased.

The funeral will be held at 3 o’clock Sunday afternoon from the residence of Lyle A. Green. Interment in the family cemetery at Dayton.1

Mrs. Isaac Green, nee Jane Trumbo, aged 74 years, passed away in this city at 6 o’clock Friday morning, after a week’s illness due to a stroke of apoplexy. Mrs. Green lived in this city for the past six years, residing at 625 East Main street at the time of her demise.

The deceased was born in Rockingham county, Virginia, June 21, 1840, and when thirteen years of age came to Illinois with her parents. She married Isaac Green in this city, in 1865 and lived on a farm near Dayton, until six years ago, at which time she took up her residence in this city. Mr. Green died in 1894.

The burial services was [sic] held in Dayton at 2 o’clock Sunday afternoon, at the home of her son, L. A. Green. Interment was in the family cemetery in Dayton.2 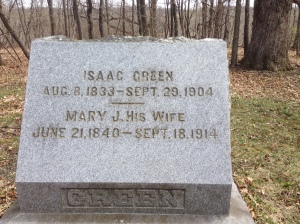 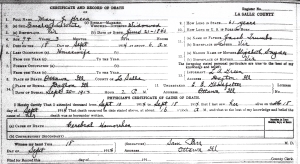 Additional information on Mary Jane Green may be found here.