HIPPARD – Mrs. Francis [sic] Hippard, 69 years old, widow of the late Steven W. Hippard, died at her home in Dayton, March 7th, following an illness of two weeks’ duration. Pneumonia is given as the cause of her demise. The deceased was born in Virginia in 1848. She had been a resident of Dayton township for nearly 40 years. He husband died about one year ago. Surviving she leaves two sons – Charles W., and Jacob, at home, and one daughter Mrs. Connors, of Wedron. The funeral service was held from the Dayton Woman’s club house in Dayton Friday afternoon at 2 o’clock. Burial was made in the Dayton cemetery.1

Mrs. Frances R. Hippard, a well known Dayton woman, died this morning at 10 o’clock following a two weeks’ illness of pneumonia. The deceased was born in Virginia, April 15, 1840.
For the last thirty-seven years she had been a resident of the village of Dayton and was well known and highly esteemed in that community.
Surviving she leaves one daughter – Mrs. Fannie Connors, of Wedron, and two sons, C. W. and Jacob Hippard, both of Dayton.
The funeral services will be held Friday afternoon at 2 o’clock from the club rooms of the Dayton Woman’s Club. Interment will be made in the Dayton cemetery.2 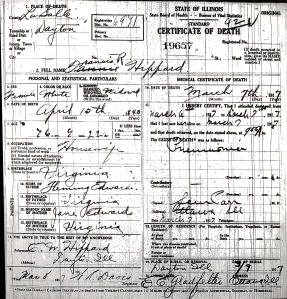