Mrs. Emily Henderson Ballou was born at Richmond. Vermont, November 3, 1839. She was married twenty years later, 1869, to Charles W. Ballou and the same year she and her husband came to Walton township, La Salle County, Illinois, to set up a home in what was then the West; and ever since have been residents of this county; since 1866 this township has been their home. Nine years ago, Mr. and Mrs. Ballou took up their residence in Dayton village and here, as in the earlier years spent in this community, have endeared themselves to associates, have been and have enjoyed good neighbors and friends. Mrs. Ballou died Feb. 3, 1912, aged 73 years, 3 months, and she leaves to mourn her loss, her devoted husband and two nieces, Mrs. Georgiana Howe of Richmond, Vt., and Mrs. Jessie Hazelton of Waterbury, Vt., Mrs. Ballou being the last of her generation. She was a queen in her home, never wearied of the duties of hostess to friends or relatives, and many pleasurable days were spent by those who loved her at the home over which she reigned. Besides the sorrowing relatives hosts of friends will miss the life gone.1 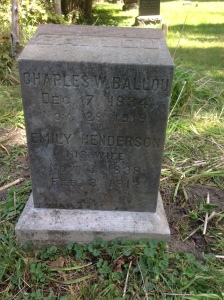 More information on Emily Henderson Ballou may be found here.