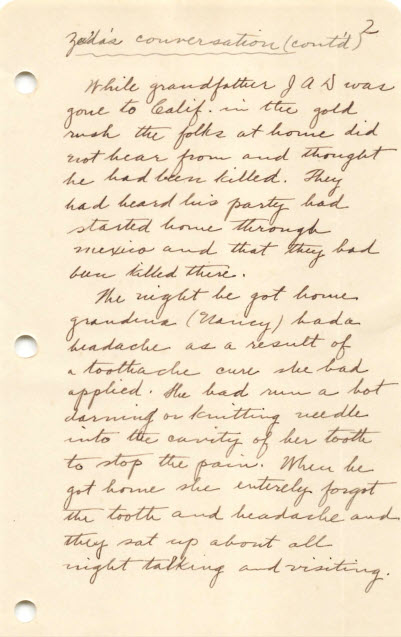 Zada Dunavan Lyons was the granddaughter of Joseph Albert and Nancy (Green) Dunavan. In 1931 her cousin David Dunavan called on her and took notes on their conversation. He sent his handwritten notes to Mabel Greene Myers, who was collecting Green family information. When I inherited Mabel’s files from her daughter, Helen, I found the notes, which included the following story –

While grandfather J. A. D. was gone to Calif. in the gold rush the folks at home did not hear from [him] and thought he had been killed. They had heard his party had started home through Mexico and that they had been killed there.

The night he got home grandma (Nancy) had a headache as a result of a toothache cure she had applied. She had run a hot darning or knitting needle into the cavity of her tooth to stop the pain. When he got home she entirely forgot the tooth and headache and they sat up about all night talking and visiting.